Daddy, dementia and me: He left the wedding service to go out for a cigarette

Sitting in the church at his adored granddaughter’s wedding, it was clear he hadn’t a clue what was going on 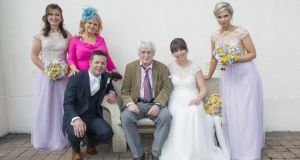 George at his granddaughter Aisling’s wedding.

When the pirate princesses (my O’Malley daughters) were small, Daddy used to play a word-game with them. In his parchment pen and ink-well writing, he would carefully spell out “supercalifragilisticexpialidocious” or the much less daunting “hippopotamus” and then challenge them to make as many words as they could . . . hip, pot, tip, top, mat, pat, hat . . . with the victor being presented with a shiny £1 and a tirade of praise.

There they would be – plaited and pretty as their families of Barbies – at his desk in Inchicore, deep in concentration, their pencils sharpened like arrows digging into the chopped reams of Irish Times paper, like yellowed bargain-basement loo roll, he used to handwrite his bridge copy on, long, long before he learned how to type with his forefingers.

You can just imagine how exciting the journey from their home at the mouth of Clew Bay to the big shmoke was for these offshore islanders, born into a Congested Districts Board cottage where electricity was still a novelty in the 1980s. (Long story!)

On their arrival off the train from Westport to Heuston Station, Grandad would be waiting under a peaked cap and his late father’s great old station master’s coat.

Hiding in some shadow and encased in a cloud of his own cigarette smoke, he would appear like some mysterious conjuror out of nowhere to a chorus of screams and hugs. His sense of divilment more childlike than theirs. Then, the ritual was that George would drive up along the quays and “magically” predict when each and every traffic light was about to change.

“Look, Grandad, the next one is red, Grandad.”

The car might slow down imperceptibly. Grandad’s magician’s hat would appear on top of his head. His voice would tremble with melodrama. Two little faces (the baby princess wasn’t born at that stage) would lean in over the back seat, eyes bigger than saucers, mouths open in dribbles of anticipation.

It was “Wow”, “Wow”, “Wow”, all the way along the Liffey, past the gallery of bridges, Rory O’More, Mellowes, Fr Matthew, O’Donovan Rossa, Grattan, the Ha’penny Bridge.

Then it was a big swing right at O’Connell Bridge, past Bewleys and Trinity College and down Dame Street to his apartment in Inchicore where a multicoloured feast of Mr Kipling cakes and red lemonade would await them.

The circle of life.

Earlier this summer – almost 30 years later – Grandad was again waiting in the shadows. This time though it was a dinky church overlooking Clew Bay, near the scenic village of Mulranny, for the eldest princess’s wedding. This time he was accompanied by a carer from the nursing home here in the wild west where he has resided for the last three years. It was a poignant picture of Daddy – sitting in a pew in the left arm of the cruciform church. It was clear to me, a novice mother-of-the-bride all pink and flushed in the front seat, that he hadn’t a clue what the hell was going on.

I wasn’t surprised to discover later that Daddy wasn’t exactly jumping through hoops when he was being dressed that morning for his eldest granddaughter’s wedding.

“I am not quite sure I will attend the wedding yet, Áine,” he had categorically told me on several occasions during the previous weeks.

“You do know I am an alcoholic and I don’t frequent bars any more.”

In the end, he capitulated to the outing because he thought he was going to a bridge congress. (He sometimes thinks he is on that watch still for The Irish Times, even though he retired, at the tender age of 83, in the autumn of 2014.)

So, you can imagine his surprise and confusion to be landed into a church with all sorts of nuptial shenanigans going on. Even though he was surrounded by familiar faces – children and grandchildren – he looked as if he had been captured by aliens and had just landed on Mars.

“It’s the circle of life,” the youngest princess whispered after the service, as I wiped away a tear. “We are making memories.”

So I just think of the tender moments now. Like when the bride and groom went over to George for the sign of peace.

“You are the most beaut….iful bride I’ve ever seen,” his whisper echoed down the church and out across the still bay.

Well, he needed a cigarette urgently.

SERIES: Daddy, dementia and me
Part 1: I couldn’t face seeing him so confused
Part 2: How can I tell daddy his son is dead?
Part 3: The stand-off about a car
Part 4: Daddy talks to me about Mammy
Part 5: He left the wedding for a cigarette
Part 6: If granny had drowned that day