Ask the Expert: ‘It has been difficult to get him to leave the house. What can I do?’ 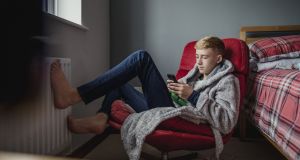 ‘I try to limit phone and video games but it is like world war three trying to enforce it.’ Photograph: iStock

Question: It has been a long, difficult summer with my 14-year-old son. It has been a constant struggle to get him to do much other than spend the whole day on video games and on his phone.

We did have a two-week family holiday and he did go the Gaeltacht, but apart from this it has been a struggle. He refused to do some activities we had arranged and was really grumpy and sometimes aggressive. I work part time and was at home a lot but also had to leave him at home by himself for periods. I’m sure he was on screens for most of that time, despite my best efforts to get him to do other things.

When I am home I try to limit phone and video games but it is like world war three trying to enforce it. He doesn’t really communicate much with me anymore. We do have parental controls on the phone and he mainly uses it for YouTube, WhatsApp and Snapchat keeping touch with online friends. We have tried to get him to meet friends in person, but he does not want to do this. His two closest ones have been away most of the summer but he still won’t meet others, preferring to be online all the time. I don’t know what to do with him.

I wonder if he is a bit down or even depressed, and I am worried about him cutting himself off.

All this time on screens can’t be good for him can it?

With the start of the new school year, we can get back into some better routine.

Answer: Long summers can be difficult for young teenagers. With an extra month of holidays it can be hard to fill their time constructively and it is particularly difficult when they are going through the normal phase of “rebelling” and “rejecting” their parents attempts to organise them.

These days we have the extra challenge of social media and technology and teens can resort to spending all their time on their screens, instead of socialising with friends and getting involved in outside activities. Many teenagers feel awkward and anxious about going out and meeting people and as a result rely on the “easier” routes of communicating via social media.

However, this not without its problems as social media is a poor substitute for face-to-face communication and online friends are no replacement for real-world ones. In addition, the focus on “comparison and judgment” in social media can make people feel bad about themselves and increase their social anxiety. The internet also comes with additional worries in that it can easily become an addictive, sedentary and isolating way to spend time and can expose children and teenagers to pornography and other unsuitable material at far too young an age.

There are several studies highlighting the risks of our overreliance on social media and screens such as the association with obesity and poor health as well as the negative impacts on mental health and well-being. However, the studies are far from conclusive and a recent large study from Oxford University found that children’s social media use has a “trivial” effect on their happiness. I suspect the results indicate a complex picture.

High levels of social media use on children who have good self-esteem and who are already doing well in friendships probably have no negative impacts. However, young people who are already vulnerable, isolated or prone to anxiety and depression are likely to be negatively impacted by high levels of social media and screen use. Resorting to social media to resolve real-world relationship problems is not likely to be successful. Relying on social media as your primary source of support and relationships is likely to leave you unfulfilled and more isolated. Certainly, in my clinical experience I see so many depressed and anxious teenagers whose mental health problems are greatly aggravated by many hours spent on their screens rather than engaging in the real world.

You are right that going back to school in the autumn provides an opportunity to reset your son’s relationship with technology and screens. The new schedule of school and extra-curricular activities might allow you to establish a more balanced routine around social media use. He himself may have been bored during the summer and be looking forward to getting back to school.

Rather than being over directive, a good approach is to negotiate with him as to how this new routine might look. Pick a good time to start this conversation, such as when he asks about it or when you have some time together.

You can start by asking him what he is looking forward to. What extra-curricular activities is he is looking forward to returning to, or what new ones would he like to start? Ask him also how he is feeling about getting back into the schedule of school and homework and explore what routine would work best for him. You can then negotiate with him what “rules” you might have about screens during the new term (eg agreeing screen-free times such as mealtimes or in the bedroom over night and also what a daily limit of screen time might be etc).

Setting these as family rules that you will keep also can help as can writing down any agreements you make.

For more ideas, see some of my previous articles in The Irish Times on dealing with excessive social media use in teenagers.

- John Sharry is founder of the Parents Plus Charity and an adjunct professor at the UCD School of Psychology. He is author of several parenting books including Positive Parenting and Parenting Teenagers. See solutiontalk.ie for details of courses and articles.