Ever looked up at Bewley’s on Grafton Street? Here’s what you’re missing 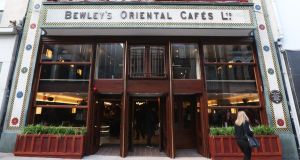 Bewley’s of Grafton Street: the facade of the landmark Dublin cafe

You’re walking down Grafton Street in Dublin and duck into Bewley’s, that institution of a coffee house that’s so familiar we hardly ever think about the building it’s in. How many times have we gone in for coffee and a read of the paper, or to see a lunchtime play or meet a friend, without even noticing its amazing mosaic facade?

The last surviving Bewley’s cafe, this was also the last of the chain to open, in 1927, formed from two Dutch-style buildings. Ernest Bewley – grandson of Samuel Bewley, who first imported tea from China in 1835 – put great care into its decor. The mosaic, whose Egyptian-style motifs were inspired by British explorers’ recent discovery of Tutankhamen’s tomb, is so colourful that it jumps out at you.

It was Ernest Bewley’s statement of belief in the new Irish State married with pride in the British explorers’ triumph – a “comfort of the dual aspect” – according to Cól Campbell, the managing director of Bewley’s, who oversaw a 1,000-day restoration of the building in the run-up to its 2017 reopening.

Campbell – the son of the sculptor Paddy Campbell, who bought Bewley’s in 1986 – is standing on Grafton Street, looking up, with Pat Liddy, the historian, writer and walking-tour guide, who has devised a new tour of Bewley’s, to point out the architectural and artistic treasures of the landmark cafe.

These are not so much hidden as sometimes overlooked because of their familiarity. He sets the tour in the context of the Quaker Bewley family moving to Ireland in the 17th century, after they decided the country was more open and tolerant of Quakers than England was.

The entrepreneurs with a conscience broke the East India Company’s monopoly when they imported that first tea. (Bewley’s still blends tea and roasts coffee.) Some of the tea they imported, Liddy points out, also served as a sort of packing material for the many china vases and urns – still all over the cafe: look up – that they brought to Ireland.

The beautiful Harry Clarke windows in the main part of the cafe are the jewel in the crown. Ernest Bewley first commissioned four windows from the celebrated stained-glass artist, depicting the Corinthian, Doric and Ionic orders of classical architecture, as well as the Composite style, which combined elements of the Corinthian and Ionic. Their columns are adorned with vases of flowers, sea creatures, exotic birds and butterflies, with leafy black tendrils to disguise the strips of lead between the pieces of glass.

Another stained-glass glory is Jim FitzPatrick’s big Celtic-motif portrait of Cruithne, lover of Fionn Mac Cumhaill, which was originally in the Bewley’s cafe on Mary Street, just over the River Liffey. The window – aka the Madonna of Mary Street – appears to have a special place in some people’s hearts: Campbell recalls a couple rocking up after their wedding, a few months ago, to take photographs at the window.

Inside, the building features art by Paddy Campbell, Éamonn Ceannt and Graham Knuttel, among others; downstairs is a poets’ corner, celebrating those with a connection with Bewley’s. The cafe has 10 open fireplaces; appropriately, they burn a composite made from coffee grounds.

Gorgeous twin stained-glass windows by Pauline Bewick, commissioned in 1988, depict a woman and a punk with a Mohican in Bewley’s, with – look closely – the Clarke windows in the background.

Although there’s a James Joyce room, marking the writer’s association with Bewley’s – he refers to it in Dubliners, and did deals in the Westmoreland Street branch to raise money for his ill-fated Volta cinema – the Grafton Street cafe could never have been his haunt: it opened well after he left Ireland.

The building incorporates the former English Grammar School, the “Seminary for the Instruction of Youth”, which Samuel Whyte established in 1758. It educated many of the great and good of the 18th and 19th centuries, including Oscar Wilde, Thomas Moore, Richard Brinsley Sheridan, the duke of Wellington and Robert Emmet. (Intriguingly, those last two were almost contemporaries.) There has been a campaign to have it declared a national monument.

A room below Bewley’s was the long-time home of its former caretaker Christy Fox, surely one of the last residents of Grafton Street.

Pat Liddy’s tours of Bewley’s are on Saturday mornings, and the €14 tickets include a coffee or tea plus a heritage bun, baked in the craft kitchen in the basement bakery.

I’ve long given up trying to be cool and aloof. Now I’m an expert at small talk
10