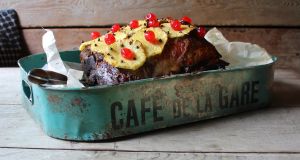 Attempting the great luncheon outdoors in Ireland is like winning a few euro on a scratch card. It’s not entirely likely to happen.

In my ideal world, we would all be Hugh Fearnley-Whittingstall, chilling out in a cottage somewhere, foraging for berries, catching fish from small streams and wearing chunky, hand-knitted sweaters.

We wouldn’t have to brush our hair, friends would pop around with homebrews, jams and jellies, we’d sit on hay bales in the sun and talk about when we are planning to smoke our hams. That would be bliss.

Living in Galway city, the closest we can get to this idyllic lifestyle is grabbing a delicious ham and cheese sandwich from McCambridge’s and heading down the Spanish Arch for some alfresco dining – if it’s not pouring with rain. You might catch a glimpse of our much-loved heron who patrols the area looking for fish heads from the local restaurants or even some cheeky little seals bobbing up and down on the River Corrib.

It always reminds me of growing up in New Zealand, and specifically Granny’s picnics on a beach day, when mum would pile us all into her Cortina with our beach towels, spades and togs. Once we arrived we’d gauge where Granny was sitting by the puffs of her cigarette smoke, rising skyward. Then we would descend on her for her treasure, the magical Tupperware collection filled with deviled eggs with curly parsley, homemade sausage rolls, and cooked ham with pineapple rings – straight from the tin.

Of course, we always had the legendary Wattie’s tomato sauce that she was such a huge fan of. As a teenager growing up during the second World War she had worked in the canning department of Wattie’s – they had been called on to contribute to the war effort – and so any dented or unusable tins were sold to her at a low price.

I’ve tarted up her Tupperware extravaganza here by adding a few of my Galway favourites: Inch House black pudding, Sliabh Aughty honey and the Lodge Barna’s Buckie mustard. If you can’t source these, use your favourite pudding, ham and mustard.

Serves four (with leftovers)
Don’t be afraid to have a nice big ham, any leftovers are useful for sandwiches, omelettes, quiches and a multitude of other things.

Method
Preheat an oven to 180 degrees, or equivalent.

Put the pineapple juice, ginger beer and spices into a large roasting dish. Add the ham and cover tightly with parchment and foil and cook in the oven for about 2.5 hours.

Remove the ham from the cooking liquid and let it cool for 4-5 hours.

Get yourself a mixing bowl, add the mustard and honey and mix them together. Cut any extra fat off the ham before rubbing this glaze all over it.

Arrange the pineapple rings around the ham and pin them down with some cloves or toothpicks. Place one glacé cherry in the centre of each pineapple ring.

Makes 24 half-eggs
You can use hen eggs too. If you want to keep it old school, dust off that star nozzle for the piping and sprinkle the finished eggs with with paprika.

Method
Fill a large saucepan with water, add the vinegar and put on to boil. Once at a rolling boil, carefully ease each egg into the water and boil for 10-12 minutes.

Remove the eggs with a slotted spoon and place them in iced water to cool rapidly.

Once they are completely cold, carefully peel them.

Slice each egg in half, longways, and carefully remove the yolk with a teaspoon.

Add the mayonnaise and other ingredients to the egg yolks and blend until smooth. This is your filling.

Put the filling in a piping bag and carefully pipe the yolk mixture into each egg white half. Top with chopped dill or smoked paprika, if using, and serve.

Makes 12
These are so tasty and can be frozen before cooking, so when visitors arrive you will have a great snack on hand in minutes.

Method
Pre-heat an oven to 180 degrees, or equivalent.

Place all the filling ingredients in a bowl, mix well and leave the mixture to rest overnight (if you can; it makes a difference).

Unroll the pastry from its packaging, roll it out into a flat rectangle and brush the edges with the egg yolk. Spread the sausage roll mix in the centre and fold over the pastry to enclose it. Seal the edges.

Use scissors to snip the top, like the back of a crocodile. Brush the top again with the remaining yolk on top.

Slice into the desired size, sprinkle with the sesame seeds and bake for 30 minutes. Serve hot or cold.