The buns are back, but the big mugs of milky coffee are gone 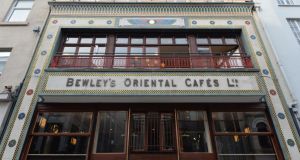 Bewley’s of Grafton Street in Dublin has had a top-to-bottom renovation costing €12 million, but for many of the customers first through the doors when it reopens on Wednesday morning, the scenes that greet them will be comfortingly familiar.

The mahogany panelling, velvet upholstered banquettes – many in cosy private booth formations – and original marble-topped tables surrounded by bentwood chairs, are all back in place in the series of rooms that have been offering beverages and buns and since 1927.

But it all feels much more spacious and light, and it’s not just down to the luminous new white carrera marble floor. The famous Harry Clarke stained glass windows are now visible from the entrance, due to significant structural changes that have been made.

“Shane [de Blacam, of architects de Blacam and Meagher] came up with the idea of opening up things and allowing light to come in, and finding new spaces that we didn’t even know we had,” says Paddy Campbell, who took over the company in 1986, forming the Campbell Bewley Group.

“We were closed for around 1,000 days. It’s a long time for Dublin to be without Bewley’s ... and it feels like a thousand years,” Campbell says of the renovations, which were initially to involve only the ground floor, but grew to include everything “from the drains to the roof”.

The project was complicated by planning issues and the fact that the building is a listed structure, both interior and exterior.

“We discovered we had to do the entire infrastructure anyway, and that’s the most expensive part. So it’s the Full Monty of a renovation job; there was no other way to do it, and the budget kept going up and up,” Campbell says, crediting his son Cól, managing director of Bewley’s Cafés, with overseeing the project.

The whole family have been involved. Veronica Campbell, Paddy’s wife and business partner of 50 years, has been responsible for what she describes as “the look and feel of the place”.

“We didn’t have an interior designer – the place has its own DNA and it was about keeping that, but freshening it up and making it more contemporary. When I’d meet people on the street and they’d ask ‘what is it going to be like’, I’d say ‘the same but different’,” she says.

Staff uniforms have had to move with the times though. A pouch, to accommodate the tablets on which orders will be recorded, has been added to the floor staff’s still fairly traditional black and white ensembles.

The business will re-open in stages, with the ground floor and mezzanine, seating 250, open from Wednesday morning, and a further 250 seats in a series of rooms on the first floor opening in January. Bewley’s Cafe Theatre, of which the couple’s actor daughter, Kelly Campbell, is a founding director, will return to the building in March and will occupy the third floor.

The café is now entirely table service, so no more clattering of trays will be heard,though there is a takeaway counter near the front door. The famous cherry buns and sticky buns with cinnamon and raisins (€3), are piled high on Kilkenny marble counters (the almond buns are still a work in progress, but more of that later).

They have been joined by a selection of fancy French patisserie featuring exotics such as green tea matcha and yuzu. These are made in the new bakery in the basement, which is entirely visible behind glass panels, on the route to the toilets.

As well as cakes and beverages, sandwiches (€7-€9) and soups will be the core offering on the menu (breakfast starts next week). “Bewley’s is a cafe. In the past we’ve strayed into the area of becoming a bit of a restaurant, doing the fish and chips and burgers and so on. I felt very strongly that this was something we shouldn’t have done,” Paddy Campbell says.

The hot drinks menu reflects customer expectations, with a variety of barista drinks replacing the mugs of milky coffee. A “limited offering” of wine and beer will be available. Opening hours are 7am to 9pm, seven days a week.

The famous Bewley’s almond buns – those towering, chunky specimens, have proved problematic for the French bakers to reproduce. “We have the original recipes and the measurements and we’ve given them all that. They can’t visualise what we’re talking about,” Paddy Campbell says. “We’ve warned them, people are going to ask for them ...”

The ones circulating at Tuesday’s soft opening, for family and friends, looked more like almond Danish pastries, but the process of replicating the originals continues. “Yesterday I was complimenting them, but today I agree, it’s a bit flat,” Campbell says.

Executive chef Ludo Lantier brings to the company wide ranging experience with the Ritz-Carlton hotel group in Ireland, Japan, Spain and Bahrain, as well as two years as group pastry chef for the Dylan McGrath restaurants in Dublin. Managing almond bun expectations haven’t been the only challenge he has faced in his new role. There have been barm bracks to contend with too. And if you think your cherry bun has shrunk, that’s down to him as well. “We made them a bit smaller, so people will enjoy more of our pastries,” he says.

Paddy Bewley, from the founding family, and a director of the company, having built up its coffee roasting and tea packing business, is among the soft opening guests, with his young grandson on hand to test the cakes. “Terrific” is his verdict on the renovations. “It’s been worth the wait.”

On the mezzanine landing there is a small framed drawing, awaiting a commemorative plaque to go alongside it. It is Paddy Campbell’s drawing of the late Kathleen “Tattens” Toomey, who started work at Bewleys when she was 15, and died in 2007 at the age of 74. Tattens latterly worked as a hostess, showing guests to their tables, and was well known to customers of the Grafton Street café.

“We never knew what age she was, her papers were burned when there was a fire in Westmoreland Street. We had about four retirement parties for her,” Cól Campbell says. “She didn’t come to the parties, she just came in the next day to report for duty.”

Bewley’s has always been about the people, from the family that established it back in 1840, to the characters, like Tattens, who who have worked there, and the customers who frequented it.

“Ernest Bewley, who ran the cafés until his sudden death in 1932, always used to cash cheques for Maud Gonne; to no one else would she entrust the task. Bewley’s, especially Grafton Street, also suckled the muses. Many creative people, from James Joyce to film director Joseph Strick and actor Cyril Cusack, had a yearning for Bewley’s. Generations of artists, writers and actors rhapsodised over it in their craft,” wrote Hugh Oram, author of Bewley’s (Albertine Kennedy Publishing 1980).

“Micheál Mac Liammóir and Hilton Edwards often gave impromptu performances there long before the Bewley’s theatre opened. Some well-known writers did much of their work there, despite the clattery noise, such as Mary Lavin. Colonel James Fitzmaurice, one of the two co-pilots on the first east-west air crossing of the Atlantic in 1928, wrote his autobiography down in what was once the basement smoke room in Grafton Street.”

There was no big, splashy ceremony planned for the day when the doors reopened on Grafton Street. “Really it’s only back when there are people in, it isn’t a building, it’s a place in people’s hearts. As much as anything else, it’s a gift back to Dublin, says Cól Campbell.