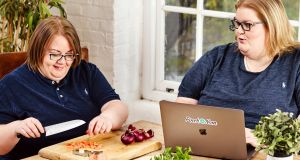 A book of diet recipes written by two British chefs, Kay Featherstone and Kate Allinson, has become the fastest selling non-fiction book since records began. Pinch of Nom, based on the authors’ food blog of the same name, has sold 210,506 copies, in sales worth more than £2 million, since it was released on Thursday of last week.

The collection of slimming recipes has notched up the biggest single weekly sale for any non-fiction title in the UK, displacing Peter Kay’s The Sound of Laughter, which was released in 2006. Only books by JK Rowling, EL James and Dan Brown have sold more copies in a single week, according to British industry publication, The Bookseller. Pinch of Nom knocked Mary Berry’s latest, Quick Cooking, from the hardback non-fiction number one spot.

Featherstone and Allinson previously owned a restaurant in The Wirral, near Liverpool. They started writing their blog in 2016, when they began to follow a Slimming World weight loss programme and identified what they saw as a need for tried and tested diet recipes. “We started Pinch of Nom to provide some helpful information for fellow dieters, to show just how easy diet food is to make,” the authors say.

Their blog quickly earned a strong following, based on a community of regular users and contributors, 20 of which road-tested each of the 100 recipes in Pinch of Nom. It now has 1.5 million followers, and almost half a million Instagram followers, and has been described by their publisher as “the UK’s most-visited food blog”.

Although they describe their recipes as Slimming World- and Weight Watchers-friendly, they are not affiliated with either brand. Their website recipe archive is indexed by Syns (Slimming World) and points (Weight Watchers), as well as by a number of other categories including by calories, course and type.

Bluebird, an imprint of Pan Macmillan, publisher of Pinch of Nom, has snapped up a further three titles from the authors – two food planners and a second recipe book. Pinch of Nom displaces Joe Wicks’ Lean in 15, also published by Bluebird, as the fastest-selling debut cookbook.

You can’t beat a good veggie burger. The very best of them are substantial and tasty and, if you’re a meat-eater, you don’t even miss the meat. This is one of those great burgers. The addition of a small amount of Parmesan gives them a fantastic sharp, rich taste. Serve with a large salad and enjoy!

Cook the potatoes in a pan of boiling salted water until soft, then drain well and mash with a hand-held masher or fork.

Mix the mashed potato and vegetables together in a bowl, then stir in the chopped parsley and Parmesan.

Divide the mixture into four equal pieces, and form each piece into a burger shape. (You can freeze the burgers at this point for cooking on another day. Thoroughly defrost the burgers before cooking.)

Spray a frying pan with some low-calorie cooking spray and place over a medium heat. Add the burgers and cook for 5 minutes or until they are golden brown on the bottom, then turn them carefully and cook for another few minutes. When the other side is golden brown, remove from the heat and serve the burgers on their own, in a wholemeal roll packed with salad.

Pinch of Nom: 100 Slimming, Home-style Recipes by Kate Allinson and Kay Featherstone is published by Bluebird £20.