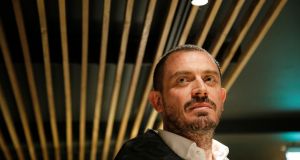 Restaurant Liath, the replacement for Heron & Grey, the Michelin-starred restaurant in Blackrock market in south Co Dublin, is due to open its doors on Friday after a €160,000 revamp.

Chef Damien Grey’s name is now the only one above the door – Liath meaning grey in Irish – having bought out his former business partner and co-founder Andrew Heron at the end of last year. Their partnership ended amicably after their final dinner service on January 26th.

A four-week renovation project that doubles the size of the kitchen, streamlines the dining area and incorporates a new entrance, was ongoing this week as preparations were being made to open for guests on Friday and Saturday.

Liath will serve dinner four nights a week (up from three), with Saturday lunch starting in the summer. The no-choice tasting menu will offer eight courses, plus snacks, for €78 per person. Reservations for May will open at 10am on April 1st, on the restaurant’s website.

Grey aims to continue to push boundaries with his dishes, now that he has more kitchen space to work in. “We had reached our limit at Heron & Grey, we couldn’t go any further with the food,” he says.

But initially, at least, the menu will feature some of the dishes that caught the attention of the Michelin guide inspectors, who awarded Heron & Grey one star in 2016, within 10 months of opening.

“We have so many dishes that we only ever got to play with once, so the idea now is to go back and pull out the best dishes of each season. But we will continue to develop new dishes too,” Grey says.

Half of the the renovation budget has been spent on the kitchen, which has doubled in size. A sleek polished quartz plinth has taken the place of the original concrete counter at which dishes are finished and plated. Induction hobs, and a high-tech oven that can be controlled remotely by wifi, replace the old gas stove. There is also a yakitori grill, which will run on environmentally-friendly lump charcoal.

The necessity of upgrading the services and the installation of three-phase electricity at the premises, a former market cafe, prompted the revamp. Sustainability was at the forefront of the decision to change to induction hobs. “We want to have a small carbon footprint in terms of energy use, so we were very conscious of what we were going to put in.”

In the dining space, the chef’s table has moved out into the body of the room, as a six-seater in its own booth. In addition, the table plan has just two tables for two, and three seating four diners each, capping the reservations at 22 diners per night, just as it was previously.

“We used to have five tables for two, but the space dictated what we could do,” Grey says. His advice for snagging a table when the next reservations go live – “plan on bringing your mates.”

For the first time in this premises, under Grey’s ownership, the tables will be dressed. “I like tablecloths, they give a little bit more formality. But it is more of a strategic thing – 88 people dine with us each week, and 44 might post photos on social media, so I am aiming to give them a clean backdrop, so when they take a photo, the food will sing,” he says, comparing the extra cost to a marketing expenditure.

Illustrator Conor Merriman has created a series of bespoke artworks for the walls, which remain whitewashed and rugged, and the palette for the diningroom takes its inspiration from the restaurant’s name. “Everything is neutral, the food is the star,” Grey says.

The original banquette seating has been re-used, but the room has been given a more contemporary, streamlined appearance. A new entrance has been created, carving more space out of what was formerly the approach to the front door.

“What I am aiming for is that when you walk into Liath, you can be anywhere you want. If you want to be in a nice quiet place, it’s a nice quiet place, or the atmosphere could make you feel like you are in another country. But you won’t be aware of what is going on outside. There are windows, but they’ve been etched so you can’t see in or out, but natural light can still get in.”

The same team of Jozef Radakovsky and Roisin Gillen are in the kitchen, with Ailish O’Neill being joined front of house by the new restaurant manager and sommelier Niall O’Connor, previously of Richmond and Etto restaurants.

Admitting to being nervous about how his new venture will be perceived, Grey says he hopes that customers will appreciate the different feel that the space has. “I bought Heron & Grey from Andrew [Heron], threw it in the air, and it’s going to land as Liath,” Grey says.

Heron & Grey’s Michelin star extinguished when that partnership ended in January; all eyes will now be on Liath to see if it makes a star-studded entry into the 2020 guide, due to be published in October.

Paul Flynn: A family favourite pasta dish and a trick for perfect ravioli
7

Drivers, slow down for the good of the planet (and your wallet)
8