Pies in the sky: British pie-maker rises to Dublin challenge 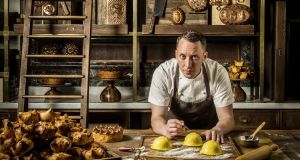 Calum Franklin, executive head chef at the Holborn Dining Room, makes some of the best known pies in Britain. He has garnered a cult following, with more than 90,000 Instagram followers, and queues forming to sample his latest bakes.

What started off as a casual interest, sparked such a response that it changed the direction of the kitchen at the vast central London dining room he oversees. It now has a dedicated Pie Room, in which his team of pastry chefs push the boundaries of pie-making, creating large-scale, complex pies, often with multiple layers of filling, and intricate plaited, pleated, crimped and woven pastry lids.

“We now always have five different pies on the menu in the restaurant, all with different pastries and fillings, with designs influenced by London’s architecture and history,” Franklin says.

This week he is in Dublin, sharing his skills with chefs and student chefs at a pie-making workshop, and taking part in a mentoring project aimed at young chefs. On Monday night he cooks one of six courses at a dinner in the Dublin restaurant Bow Lane, organised by an industry group, Chef Collab, which gives young chefs a chance to team up with and learn from more experienced industry figureheads.

The apprentices spend time in their mentor chefs’ kitchens and then they work together to present a dish at one of the monthly dinners which the group puts on, and which are open to the public.

Chef Collab was set up by Chad Byrne, head chef at The Brehon Hotel in Killarney, and Franklin read about the initiative on social media, before meeting Byrne in person and accepting an invitation to get involved.

That goose pie cut through from our collaboration with @the_history_cook for the Financial Times. Still one of my favourite projects ever and I've realised I need to spend more time in the books of the British Library with Polly. She's pretty awesome.

“We met at a charity dinner I was cooking at in London and it went from there. Anything that encourages people to join the industry has my support and Chad has created a brilliant format for that,” he says.

At Monday’s event he and his Irish student chef, Dan O’Sullivan, who spent several days last week working in the Holborn Dining Room kitchen, will serve a type of pie, of course.

“We are cooking a really classical form of pie called Pâté en Croûte, which is actually a French style, but I thought it suited the idea of training a young chef in a skill that will be with them forever. It’s a complex dish to make and you really need someone to take the time to train you in it, as it has so many little tricks. Ours will be a rabbit, bacon and pistachio version.”

In the past, Franklin has worked with Polly Russell, a food historian at the British Library, to create a pie based on the first recorded British pie recipe. “I created a massive goose pie with an actual goose shaped pie on the top. It’s easily my favourite pie to date, there were so many challenges to get my head around, but that’s half the enjoyment; the other half is in the eating.”

The Pie Room is a beautifully crafted addition to Holborn Dining Room. “I opened the Pie Room originally because I needed the right environment to be able to push our savoury pastry work further and from there I developed it to encompass retail, masterclasses and private dining as well.

“I created a design for the room to reflect the attention to detail that is found in the pastry work and also that felt Victorian in age. I wanted it to nod back to the pie rooms of 19th century London and embrace that period of our food culture."

The next Chef Collab dinner takes place on May 26th in Killarney, with tickets going on sale on May 2nd.