Now we know: It’s definition divides people, but could white chocolate be your ticket to childhood? 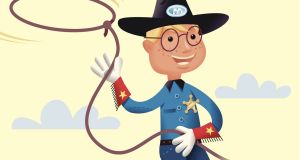 The Milkybar kid: The very first Milkybar Kid ad aired on TV in 1961.

Looking back, it’s really no wonder that everyone loved the Milkybar kid; he was one generous cowboy. “The Milkybars are on me!” this little blondie would proclaim, looking out from beneath his Stetson and spectacles.

The very first Milkybar kid ad aired on TV in 1961 starring child actor Terry Brooks, and by the early 1970s Milkybar had become Nestlé’s best-selling product. The history of the Milkybar brings us back to 1936 when it was first launched in Europe by Swiss company Nestlé, and it is believed to be the first white chocolate ever produced.

But – and we hate to destroy your childhood memories here – did you know that white chocolate isn’t technically chocolate? Writing for mentalfloss.com, Stacy Conradt explains that the chocolate nibs that are extracted from a cocao bean are ground to a paste, known as a chocolate liquor. “The chocolate liquor can be separated into two parts: cocoa solids, which is where we get that delicious chocolate flavour, and cocoa fats, better known as cocoa butter,” writes Conradt. “White chocolate doesn’t contain any cocoa solids. Though one of its major ingredients is cocoa butter, the substance lacks any flavour, which is essentially how we define something as chocolate.”

However, some white chocolate fans have come to the defence of this sweet fatty treat. Speaking to The Washington Post in 2017, pastry chef and cookbook author David Lebovitz thinks that “bickering over the nomenclature becomes tiring. We still call hamburgers by that name, even though they are not made of ham, and milkshakes actually aren’t shaken these days, but blended. So I think it’s okay to group white chocolate in with the rest of the variety of things made from cacao beans, since they all have the same base.”

The Washington Post article, written by Simran Sethi and entitled “For those who think white chocolate isn’t ‘real’ chocolate, have we got bars for you”, highlights some truly luxurious and artisan white chocolate treats.

Or you could go back to your childhood and try a Milkybar? After all, they’re not just for kids, you know. In 2017, Nestlé announced changes to the Milkybar recipe as part of a company-wide initiative to reduce the amount of sugar in its products. The new Milkybar now has 9 per cent less sugar and more than 10 per cent more milk, and its new packaging reads “Milk is now our No 1 ingredient.” Milkybars have been free of of artificial ingredients since 2007.