Why are actors quick to blame everyone else for bad films?

There is a long history of actors deriding poorly received work, with Cats star Rebel Wilson being the latest 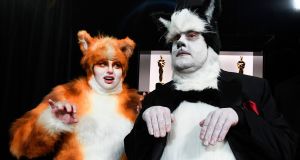 Rebel Wilson with her Cats co-star James Corden at the Oscars: the pair arrived in deliberately awful representations of their feline selves, wrapping irony around their introduction to the visual effects prize. Photograph: Getty Images

At the recent Bafta ceremony, Rebel Wilson drew laughs for her takedown of the season’s biggest cinematic catastrophe. “I made this dress by sewing two old dresses together,” she said. “The red is from that one time I didn’t win Miss Australia. And the black is from a funeral I just went to for the feature film Cats.

In case you missed the furore (you almost certainly missed the film), Wilson was among the stars of Tom Hooper’s already notorious attempt to move Andrew Lloyd Webber’s dated musical to the big screen. The reviews were atrocious. The box-office returns were worse. The audience in the Albert Hall were chortling not just at Wilson’s timing, but also at her apparent good-sportiness in dissing one of her own projects.

There is a long history of actors deriding poorly received work. Michael Caine has made more bad films than there are atoms in the observable universe and he’s not shy in acknowledging the fact. A few years ago, he willingly accepted my offer to repeat a favoured line on Jaws: The Revenge. He said he’d never seen the film but . . . “Yeah, yeah. I did say that,” he interrupted me. “. . . but I’ve seen the house it built for my mum and it’s fantastic.”

Matthew Goode has made no attempt to defend his role in the dire Irish-set comedy Leap Year. He confessed that he took the job “so that [he] could come home at the weekends”. He went further in his attack on that notoriously fecund source of Paddywhackery. “Was it a bad job? Yes, it was. But, you know, I had a nice time and I got paid,” he said.

Fair enough. Actors acknowledge feet of clay by admitting shame at participation in artistic failures. The problem is that – unlike an artist disowning an early painting – the actor is dismissing not just his own work. Neither Caine nor Goode is saying: “My awful performance ruined an otherwise excellent project.” A director, a set designer, some writers, a bunch of publicists and a cadre of fellow actors were also involved in making Jaws 4 and Leap Year the garbage they undoubtedly were.

Wilson and James Corden, her co-star in Cats, have been reminded of this distinction. They certainly generated guffaws with their appearance at last weekend’s Oscars. Arriving in deliberately awful representations of their feline selves, the two wrapped irony around their introduction to the visual effects prize. They noted that, as cast members of Cats, they understood the importance of (pause for emphasis) “good visual effects”. Ha ha! It was all the stupid boffins’ fault.

The Visual Effects Society responded with its own shade. “The best visual effects in the world will not compensate for a story told badly,” a statement read. Ooo, saucer of milk for the nerds at table three (get it?). Take that writers, directors and other people involved with storytelling!

“On a night that is all about honouring the work of talented artists, it is immensely disappointing that the Academy made visual effects the butt of a joke,” the statement continued. You hardly need to be told that the missive contained mention of the word “community”. Everybody is in a community these days: hatters, stamp collectors, dog walkers, visual effects artists. When did that happen?

Hang on. Where was I? Oh yeah. The rebuttal from the effects “community” may have been a tad pompous, but it did remind us that actors have to tread carefully when denouncing unloved films. Other egos are involved.

In the case of directors, disavowal usually involves an explicit shift of blame onto other shoulders. The strategy is so common that a fictional film-maker – one Alan Smithee – has been invented to take the credit when directors feel studios, producers or editors have shafted them. Tony Kaye has been giving out about American History X, allegedly recut by star Ed Norton, for the last 20 years. The Directors Guild ultimately refused permission for Mr Smithee’s name to appear on the credits.

More honourable are belated reappraisals by authors or musicians. Kraftwerk don’t consider their first three albums worthy of inclusion in the canon. “I re-read Brideshead Revisited and was appalled,” Evelyn Waugh said of his most famous novel. Martin Amis gets uppity if anyone mentions his book Invasion of the Space Invaders. Good for them. Nobody else is being blamed.

Yet there is a qualification worth making here too. All such disavowals are made from a position of strength. “I made an error, but I sorted myself out,” they seem to say. Where are the renunciations from those taking responsibility for continuing failure? “I wrote a bad book, nobody liked it and I remain stranded in deserved obscurity,” one might read.

Too much icy reality there, I fear. Let’s just chuckle at the Cats people instead.

Fintan O’Toole on Jonathan Swift: a moral giant and founder of Anglo-Irish writing
5