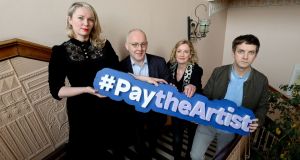 “I’m from a working class background, and for first time ever I’ve managed to elected two TDs. And I will be holding them to account: I voted for them because I wanted a leftist change in this country. We’ve been living in a decade of capitalist austerity. It is crushing people. Whoever forms the government, you’ve seen a level of anger that is not going away.”

Jesse Jones, the visual artist who represented Ireland at the Venice Biennale in 2017, was speaking at the launch of Paying the Artist, the Arts Council’s new policy and #paytheartist campaign to improve artists’ working and living conditions by ensuring fair and equitable pay.

She’d love to discuss arts policy with a new government, along with other artists, she said, because the parties’ presentations at the arts hustings before the election “across the board were very poor. It filled me with anger, the lack of imagination that even our smartest people on the political left are not talking to artists enough. Artists are part of the precarious working class that gave them a kick in the proverbial arse last week at the ballot boxes.”

Speaking to assembled artists, cultural organisations and the Arts Council at the launch in Poetry Ireland’s HQ, Jones said: “We talk about artists punching above their weight in terms of international standing. And I’m sick of that argument, because I don’t know much about boxing, but I do know it’s actually very dangerous to punch above your weight.” Very few artists can sustain a full-time career from art, and need a “side hustle” to live in a precarious economy.

Jones said: “Ireland is bereft of artists right now... We all know dozens of talented Irish artists who have left to go anywhere else in Europe where they can afford, that isn’t a bedsit for a grand and a half.” While people “go on romantically” about great art, it’s as if artists have to “perform their poverty”.

She said: “We need to put class politics on the agenda and start talking about how hard it is to live in this country with one of the lowest rates of corporate tax in the world but where artists can’t afford to live.”

Emmet Kirwan, the actor, playwright and screenwriter (of Dublin Oldschool), also spoke at the Paying the Artists launch. “Art cannot survive in a free-market neoliberal economy. That’s why it needs a State subvention. But people are making money from our art; it’s just not artists who are making the money,” he said, mentioning sectors such as hotels and pubs and tourism. For artists, “The same market rules don’t apply: we’re expected to work for free.”

He performed an impassioned long-form poem where he talked about creating cultural capital, where artists give Ireland “soft power” on the world stage. “Well, it gives the country prestige; we’re still chasing royalties.”

He talked creating work with friends, but “I’ll DJ with your first gig/ I’ll DP your first short/ But when the tickets start selling/ or the door man is getting paid/ or security is getting paid... /everybody in the building from the cleaning staff to one behind the big desk/ on the top floor is getting paid, but you’re getting paid in/ exposure.../ What is this exposure? It doesn’t pay bills.”

The poem points out that to become a doctor “you have to train for 10 years and you get paid”, but to “master the piano it could take you 30 years/ but you’re expected to work for free/ cos you’d do it anyway/ but you’re not paying for the playing/ you’re paying for the 30 years of work they did before this moment.”

He said afterwards that, following the election, he thinks “the best thing for the arts would be a broad left coalition. What was promised by the last government, a 7 per cent increase year on year for the next five years, is minuscule.” From the new minister he wants to see help for young artists starting out, for them to get benefit from the economy, and for artists to be properly paid.

At the policy launch the chairman of the Arts Council, Kevin Rafter, said: “We know artists have precarious careers, experience poor living and working conditions; and that the nature of arts practice and the arts sector places many artists in a weak negotiating position. We want to start addressing these issues.”

The agency wants to end the practice of it being acceptable “to get artists to work as a ‘freebie’ or to offer work without proper payment because it might somehow enhance an artist’s career. Artists should be paid fairly and equitably for their work.”

He also used the platform to “encourage the new government and the new minister for culture to be ambitious for the arts, and to let that ambition be seen in the Arts Council budget for 2021”.