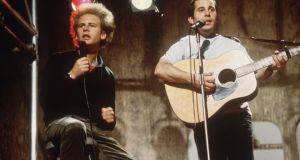 Art Simon and Paul Garfunkel: Bridge over Troubled Water was the best-selling LP for 1971, 1972 and 1973. Yet no student ever posed with it under their oxter. Photograph: Hulton Archive/Getty

There has been a lot of this from horror fans recently. Films such as Robert Eggers’s The Witch and Ari Aster’s Midsommar are, you see, “horror for people who don’t like horror”. Aster and Eggers, the argument goes, think themselves better than the directors of Spawn of the Slithis and Basket Case 3: The Progeny.

Coldplay, Elbow and Dido are among many rock equivalents. Andre Rieu provides classical music for people who don’t like classical music. For generations, James Last straddled a wide field of genres. If you liked neither rock nor classical nor jazz, then you were still likely to enjoy whatever we’re calling the noise that emerged from the German musician’s orchestra. Fair enough.

I’m not pretending to be anything other than a snob. When doing my cultural appreciation, I wear a monocle, two top hats and a bowtie made of spun gold. But this argument reveals condescension shocking to even gatekeepers of my rigidity.

All of which brings us to the 50th anniversary of an album that – played on hi-fis for people who don’t like hi-fi – blaringly closes out all conferences dedicated to music for people who don’t like music. It was the best-selling LP for 1971, 1972 and 1973. By the end of that run, it had become the best-selling record of all time. It plays in elevators, shopping malls and in planes after they land. It contains some of the most enduring tunes. Yet no student has ever plucked it from the shelf to hold posingly under oxter as they wait for the bus on which the clever kids ride.

The record was released in the same month – January 1970 – as The Band’s eponymous second album and The Madcap Laughs by Syd Barrett. Ten years later, you could, when taking a rest from contemporary accessories such as Joy Division’s Closer or Magazine’s The Correct Use of Soap, still pose convincingly with those two excellent collections. Certain albums from that month were initially ignored before, decades later, being confirmed as underappreciated masterpieces. If you were waiting for the 46A with, say, Laura Nyro’s New York Tendaberry then you deserve a retrospective decoration from the taste police. You won’t be getting any such gongs for carrying around the eventual subject of this column.

Pop music has always divided the generations, and, in 1970, that separation was more of a fiery chasm than a negotiable ditch

There were any number of reasons to be suspicious of Bridge over Troubled Water by Simon and Garfunkel, but none was so convincing as the awareness that your parents owned it (or, in my case, The Sound of Bridge over Troubled Waters by the Geoff Love Orchestra). Pop music has always divided the generations, and, in 1970, that separation was more of a fiery chasm than a negotiable ditch. Simon and Garfunkel didn’t make erotic advances on their guitars like Jimi Hendrix. They hadn’t been banged up for gear like the Rolling Stones. Even the Beatles, who once seemed so nice, had turned into dangerous weirdoes. Simon and Garfunkel made music that the proverbial milkman could proverbially whistle. All this was, in the brains of Miles Davis heads and MC5 enthusiasts, enough to condemn it as Music for People who Don’t Like Music.

That situation hasn’t much changed. The divides are not so marked as they once were, but, though less sneered at, Bridge over Troubled Water never became cool. Earlier Simon and Garfunkel LPs such as Bookends and Wednesday Morning 3AM skirted acceptability. The big one was a little too slick, a little too cosy and a little too familiar. We’d think of El Cóndor Pasa as cultural appropriation now. Though an untouchable song, The Boxer is almost murdered by the operatic over-production. Bye Bye Love is a cover. Why Don’t You Write Me is the one everyone forgets about.

Everything else on the record is terrific. The Only Living Boy in New York profits from the echoing aural space. Song for the Asking makes a virtue of its wispiness. And then there is the title track. I had a flatmate who, around 1990, used to return from superannuated warehouse raving (he was someway short of 30, but still counted as old in that environment) and, as a ritual, blare Bridge over Troubled Water at a volume that would wake babies not yet born. It may have been the MDMA. It may have been the hangover from Italian piano house. But he didn’t care that it was music for people who didn’t like music. And nor did I. Even if I had work in the morning.