Many names come from a place’s attributes, while the origins of others are unknowable 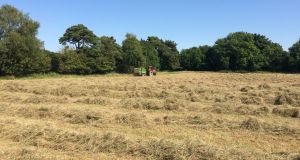 Strange how our appreciation of things can correlate with how close we are to losing them. The upsurge of interest in local fieldnames around Ireland is a prime example: it appears to be in ascendance just as the threat of their decline increases, as land changes ownership and older generations pass on. Groups across the country are beginning to seek out the elderly in their communities to record the local names associated with meadows, pastures, commonage and stretches of scrub land.

Field names can tell us much about our local area how people appreciated the physical landscape, its hills and hollows, streams, and bogs; but also its history and traditions, from holy wells, to fairy forts, old settlements, and estates. An article in The Irish Times Magazine in 2018 explored the insights garnered from 7,000 names collated by the Kilkenny Field Name Recording Project, and 24,700 field names recorded in Co Meath, unveiling some very odd names indeed, including Co Antrim’s townland of Ballypitmave, derived from Baile Phite Méabha (which translates as Queen Maeve’s vulva), Co Tipperary’s Skeheenarinky, from Sceichín an Rince (little thorn bush for dancing), and Co Leitrim’s Faslowart, from Fás Lúghoirt (the deserted herb garden).

Each placename is like a code that can be deciphered to reveal insights into the culture, genealogy, myths, climate, botany, topography, and geology of a region. They are “the essential threads that hold the quilted fabric” of the landscape together, according to Alan Counihan of the Kilkenny Field Name project.

The latest area to have embarked upon such decoding of its landscape is Westmeath, where 725 field names were collected from 64 townlands in 2018, with the same amount again gathered from a further 55 townlands in 2019. Overall, 100 volunteers were involved in the harvesting of this lore and some noteworthy elements arose, such as the fact that in parts of north Westmeath, 10 to 15 per cent of the field names were in Irish, revealing that the language survived in the area far longer than one would imagine.

More names emerged than were gathered in the last great harvesting of oral heritage in 1937-38, as part of the Schools’ Folklore collection. Aengus Finnegan, the project co-ordinator, says that it seems clear these names were being used back then, “as examples such as Sceichín, Garraí Glas, Cnocán na Gréine, Garraí Phiatair, from around Ballymore must date back to the 19th century, when Irish was widely spoken in the area, and were certainly in use in the 1930s”. Despite not being officially recorded 90 years ago they survived on in the communal memory of the region until today. “It reveals the robustness of the oral tradition right into the 21st century,” says Finnegan.

There are poignant insights to be found in the names of many wetland areas that have been lost due to ill-advised draining programmes; places like Móinín (little bog) in Cloonageeragh, Fore, The Middle Curragh in Fennor townland, and the many “locháns” (pools – often pronounced “loohawn”) scattered all over the county. Interestingly, many of these areas may now have to be re-flooded to help alleviate carbon emissions and deal with rising water levels.

The myriad sustainable micro-industries that were practised over many centuries are also revealed in names like Sawpit Field near Collinstown, which refers to a deep pit in the ground over which a tree trunk lay so that it could be sawn into planks with a two-man saw from above and below. “This was a common practise,” says Finnegan, “up until sawpits fell out of use in the 18th and 19th century.”

Other mini-industries are hinted at in names like the Cooper’s Garden in Ankersland, Fore, which an elderly resident offered, along with fond memories of the smell of the hot oak when the insides of the newly-made barrels were being charred to provide a seal. Other examples include The Forge Field, Lackan, The Hopyard, Carpenterstown, and Kiln Park, Glenidan.

But for every prosaic and practical name rooted in the physical attributes of a place, there are others dealing with the esoteric and the unknowable. They include the many field names linked to fairy forts, and the few that were considered to be potential portals to another dimension, often known as “The Stray Field”. These had the ability to disorientate you and seemingly transport you to somewhere unrecognisable. The Horse Field in Cummerstown, Collinstown, is an example, which was described by a local as being “Noted for the Stray”, meaning that one could get lured to the Otherworld by walking through it.

Finnegan is proud of the insights and information recorded so far, but is aware that so much information still remains to be collected around the country.

“We were fortunate to be funded by Creative Ireland, the Heritage Council and Westmeath County Council, but some way needs to be found for this model to be extended nationwide, and fast – every lost year is another swathe of information wiped from our collected consciousness.”