No Netflix, I am not going to finish watching Schitt’s Creek 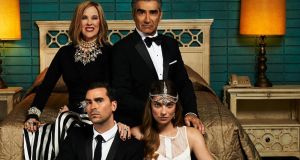 Netflix has become a nagging parent. No, scratch that. Here’s a comparison that will serve to bind my larger argument. Netflix has become Sybil Fawlty reminding Basil to hang the moose’s head. “I’m doing it now. TELL HER I’M DOING IT NOW!”

“Don’t forget to finish Schitt’s Creek,” an actual email told me a week ago. Yeah, yeah. I’ll get round to it (I won’t). Get off my case, Mum.

Just four days later, they were banging on my bedroom door again. “Don’t … forget … to … finish … Schitt’s Creek,” the email – now with implied exasperation – reiterated. I’ll do it later (I really won’t)! I’m listening to the new My Chemical Romance LP while smoking fags out the window.

This is a whole new kind of nuisance. Hodges Figgis doesn’t call round twice a week to make sure I haven’t given up on Wolf Hall. To use a less antediluvian example, nobody at Spotify seeks to make me feel guilty for listening only once to that Nick Cave album.

Anyway, I’m not going back to Schitt’s Creek. The Canadian sitcom, whose opening series were unbeatably good, commits one of the great sins about halfway through its six-season run: it becomes nice. If we have learnt anything from history, it is that cruelty and misery are hilarious. Kindness and contentment are fine in real life (probably), but they have no place in a comic entertainment. By all means, warn actual, living humans about the looming manhole. Let Norman Wisdom break his neck.

The show is essentially The Beverly Hillbillies in reverse. Eugene Levy and Catherine O’Hara play Johnny and Moira, urban snoots forced to live in a hick town when their business goes belly up. Annie Murphy and Daniel Levy (Eugene’s real-life son) are their pampered, grown-up children: Alexis has just about survived the Paris Hilton Trail; David is a tad more grounded, but is still frightened of every passing bug.

All four are excellent. O’Hara gets many good lines, but, twisting vowels into grand aural pretzels, she can be just as funny with “pass the butter” or “what time do you call this?” Levy continues to be the Paganini of amiable bewilderment. Murphy (eyebrows in another zip code) and Levy jnr (half-man, half-knitwear) hold their own against entertainment royalty.

The show initially has great fun with the solipsism of its core family and the ingenuousness of their new neighbours. The writers make it clear that the characters are no sort of monsters – the fights usually end in rapprochement – but their disdain for the people of Schitt’s Creek is unambiguous. More useful still for those in search of yucks, our heroes remain miserable for a good three series. Once a successful soap actor, Moira behaves like a Romanoff in exile. Alexis longs for the red carpet. David remains aghast at the stuff these people wear. It’s great. It’s nearly a classic.

Then it all goes wrong. That is to say it all goes right. The family reach an accommodation with the locals and turn antagonisms into rocky friendships. Much worse still, Alexis and David, hitherto romantic elitists, form successful romantic liaisons. She gets hitched to a decent, caring veterinary surgeon. He hooks up with an equally decent, equally caring bloke and, after establishing an upmarket store, they decide to get married. All of this would be tolerable if it happened in one of those famously disappointing final episodes. But there are hours of this unamusing happiness still to come (I guess. I finally gave up on episode three of season five).

I feel bad giving out about Schitt’s Creek. It is good to see a mainstream show in which a gay couple come together without encountering homophobia or even surprise. David’s relationship is no more remarkable than Alexis’s. But the general contentment that passes over the town is an unremitting buzzkill.

Comedy feeds on tension and frustrated desire. Even a team as sweet as Laurel and Hardy were bickering 90 per cent of the time. The Marx Brothers were swindlers. The Office, Fawlty Towers and Rising Damp were all about miserable men trapped halfway up rickety ladders. When it goes wrong, a class of Stockholm syndrome sets in and the writers, half in love with their own creations, give those characters what they want (but shouldn’t have). Niles gets together with Daphne in Frasier. The Conners family win the lottery in Roseanne. The Rose clan in Schitt’s Creek stop being snobs and learn to love the hayseeds. The shows stop being funny.

At least, in earlier times, no digital Sybil followed us round to demand that we keep watching the awful, implausibly cheery version of Roseanne. Go away, Netflix. Remember the mantra the writers of Seinfeld lived by? No hugging, no learning. Never were four smarter words spoken.