With Dev Patel as David Copperfield, movies have caught up with theatre’s creative approach 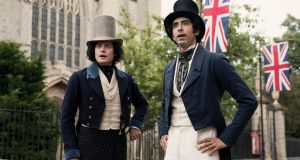 A conversation that began in the theatre decades ago is finally registering on the screen. There was little clutching of pearls when Ruth Negga played Hamlet at The Gate in 2018. It seems likely that the author had a white male protagonist in mind, but most audiences have grasped that no Shakespeare production strives for unfettered naturalism. Yes, Negga is a woman of colour. But, in Shakespeare’s time, men played all the female roles. And Hamlet isn’t written in Danish. So, shut up!

There was, however, some muttering in the undergrowth when David Oyelowo turned up as Javert in the BBC’s recent production of Les Misérables. As part of his exhausting campaign to place all the world’s inverted commas around the word “woke,” actor Laurence Fox later noted “the oddness in the casting” of a Sikh soldier in Sam Mendes’s 1917, before backing away to an uncharacteristic apology. And last week we got Armando Iannucci’s The Personal History of David Copperfield. The adaptation casts Dev Patel, of Indian descent, as the title character; Benedict Wong, whose parents are from Hong Kong, as Mr Wickfield and Nikki Amuka-Bird, from Nigeria, as Mrs Steerforth. Literary adaptations have habitually underestimated the racial diversity in 19th-century England, but Iannucci is not aiming for historical corrective here (or only partly so). Mrs Steerforth is black, but her son is white. No one else in David’s family appears to be from an Asian background. Iannucci explained: “When I thought of Dev as David, he said: ‘Do I have an Indian father?’ No. Although it’s set in 1840, for the people in the film, it’s the present day. And it’s an exciting present.”

That is to say – as with Lin-Manuel Miranda’s all-conquering, racially diverse Hamilton – Iannucci is not seeking to render characters as they would have typically appeared in the story’s original setting.

Film and television seem like more naturalistic forms, but artifice is always at work. It is unlikely that Javert would have been black. It is equally unlikely that Madame Thénardier would have spoken with Olivia Colman’s East Midlands’ accent. Heck, unless I’m imagining it, there was a version of Les Misérables in which the characters sang their lines while an orchestra boomed in the background. That would never happen!

To be fair, relatively few objections to Iannucci’s strategy have surfaced. Even the Daily Mail’s critic liked it. AN Wilson’s whinge in the Times was the closest we got to a dropped pince-nez. Inexplicably arguing that the film was “humourless” – I’ve rarely heard such hoots at a press screening – the Victoriaphile went on to note that Mr Micawber was too thin, that Uriah Heep lacked menace and, in the form of domestic national treasure Bronagh Gallagher, Mrs Micawber was too Irish. It hardly needs to be said that he thought the colour-blind casting reeked of “virtue signalling” (though, in his defence, he did avoid “woke” and its withering inverted commas).

Those who demand utterly faithful adaptation will not be satisfied until every breath of cinematic life has been hammered from the work under discussion. No leeway is available to film-makers who fancy experimenting with a version that reflects the diversity of contemporary life. Wilson in his criticism was, at least, lucid. The most common objection on social media involved an arch pondering of whether the director would mind if “Martin Luther King was played by a white man”. Others argued (with some justification) that the same people who enjoy the colour-blind casting in David Copperfield ranted about Scarlett Johansson blithely taking a role written for an Asian character in the 2017 movie Ghost in the Shell.

Obviously, we don’t wish to entertain those rendered puce in the cheek by this sort of performative dog whistling. Nonetheless, it is only fair to address that apparent contradiction. Actors of colour – like those from most other minorities – have struggled to find roles in film, TV and theatre. They should thus reasonably expect casting agents to make some effort to place them in roles originally conceived for their particular identity. James Bond is a fictional construct. He’s been Scottish, Welsh and Irish. He can, as the series’ producer Barbara Broccoli recently noted, be black (though probably not a woman). Martin Luther King was a real person whose public role was defined by his race. So, no, @Trump42020, your rejoinder isn’t as clever as you think.

No less an authority than August Wilson, late laureate of African-American life, objected to colour-blind casting on the grounds that he wanted black people to devise their own stories instead. One approach does not preclude the other. Adopt that strategy and you shut off most of the world’s actors from most of Shakespeare, Dickens, Molière, Ibsen and Tolstoy. Those writers could surely have made the imaginative leap Iannucci invites in The Personal History of David Copperfield. We can too.