Sonic the Hedgehog: They do make garbage like they used to 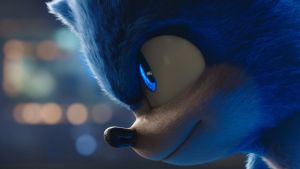 Sonic the Hedgehog: Who in the name of bejesus is this thing for?

In some ways they do make garbage like they used to. There are not many points of comparison between Jim Carrey and Hopper, but they were almost exactly the same age – 58 and 57, respectively – when they turned out for villain duties in console-inspired entertainment. Hopper was, however, exploiting a recent career resurgence. Jim Carrey, rarely seen on the larger screen, now seems about as current as the Sega Mega Drive. Whassssuuuuuup?

But hold on. You could argue that, in one limited sense, Sonic the Hedgehog is very much of the moment. Jeff Fowler’s effluent delivery system is among a small collection of recent projects that have inadvertently taken on Twitter and Reddit as unofficial collaborators.

It is 10 months since the trailer premiered to universal disgust and outrage. Obviously, nobody expected Aguirre, the Wrath of God, but even cynics were taken aback by the uncanny-valley vibes of the title character. The unsettling combination of humanoid features and glossy fur suggested one of those sexual eccentricities we’re discouraged from ridiculing for fear of “kink-shaming”.

Something similar happened with Cats a few months later, but that was too huge a dilemma for meaningful overhaul. The Sonic people nudged back release date and constructed an entirely new hero. It’s worked. Sonic the Hedgehog is not disturbing or peculiar or aberrant. Nobody will – as they already are with Cats – be attending midnight screenings to shout out their least favourite lines. The film is merely dull, bland and pointless. Good work.

One may as well detail the plot of a drain cleaner or a weather system. A sickeningly confusing prologue set in a universe something like the video game tells us how Sonic (voiced by Ben Schwartz) is forced to flee bad things and travel hopefully to our own blue planet. He finds an idyllic life in Montana where he speeds along lovely arbours, reads comics and spies on a handsome sheriff (James Marsden, who is surely above all this).

Who in the name of bejesus is this thing for? The Sonic franchise has gone through many iterations since its conception during the Bush administration, but its most devoted followers are mostly of an age to be worrying about their teenage children’s tattoos.

In the unlikely event men and women in early middle-age want to relive their 16-bit youth, they will have to wait until the last 15 minutes for a big-budget recreation of the game. To that point, Sonic the Hedgehog makes the mistake of trying to be a real movie with characters and situations and plot points.

The filmmakers seem to be harbouring a naïve belief that punters will pay money to watch a comedy about a friendly cop bonding with a wise-cracking forest creature while driving through uninteresting scenery. For most of its duration, Sonic could be working from the script to that Woody Woodpecker movie you prey will never happen.

Jim Carrey, who broke through at the height of Sonic fever, looks to have been imported to attract the same audience. The tiresome gurning, trachea-gurgling and amateur gymnastics may trigger a few nostalgic smirks, but you may as well put younger viewers – the inevitable audience – before the dead bloke out of Easy Rider.

Echoes from another century made bland digital flesh.