Why do they have breasts but no nipples? Why do some have furry feet and others shoes? 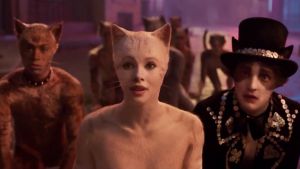 Cats: What kind of monstrous, purring, licking chimera are these?

Remember when that furrie-friendly Sonic trailer was released and everyone lost their minds? So the director, Jeff Fowler, held his hands up and retreated into an SFX suite in order to fix the iconic hedgehog. And all was well with the world.

Remember when that furrie-friendly Cats trailer was released and everyone lost their minds? Why were Bombalurina’s (Taylor Swift) breasts so inappropriately large, they wondered? Why were the tails placed where tails ought not to be? Was it really supposed to be this creepy and bestial?

And nobody held their hands up.

Fair enough. Director Tom Hooper has scored enough hits, including a 2012 translation of Les Misérables, that you have to believe the filmmaker knows what he is doing.

Besides, from its very inception, and in every incarnation, Cats is a weird project. TS Eliot’s Possum’s Book of Practical Cats appeared in the first week of October 1939 to baffled pre-war notices before scoring record sales. Andrew Lloyd Webber’s 1981 musical adaptation runs thus: over the course of a single night, a tribe of cats called the Jellicles make what is known as “the Jellicle choice” and decide which cat will ascend to the Heaviside Layer and come back to a new life. It’s a bonkers idea that is now the fourth-longest-running Broadway show and the sixth-longest-running London show in history.

From the get-go, this new film version struggles against ugly CG backdrops and odd spaces. The framing is either too tight or off-centre to allow the dancers to shine in a grand old Busby Berkley formations. It never looks like a movie, nor do the unamusing insertions of dialogue into a sung-through piece, ever sound like a movie. There are some convincing performances, especially Jason Derulo’s rowdy Rum Tum Tugger and Francesca Hayward’s charming Victoria. Hate-watchers may be relieved to see James Corden end up in a bin. Jennifer Hudson gives Memory plenty of welly, even if she tends to emote in all the wrong places.

But the real issue is the distracting and disturbing “digital fur technology”. Every time Cats settles into an admittedly avant-garde shape, an ear twitches or a tail flicks and you’re back thinking about how ghastly the actual cats look. Why do they have breasts but no nipples? Why do some have furry feet and others wear shoes? What kind of monstrous, purring, licking chimera are these?

What we have here is future technology that, to borrow an old Irish phrase, needs to be put beyond use. Shoo.