Donald Clarke: A 19-year-old electropop sensation is to write and sing the next Bond theme and Twitter is not amused 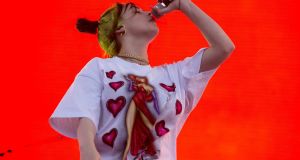 I’ve bored you about it before and I’ll bore you about it again. The most telling line in the James Bond franchise begins with an observation on high-end catering. “There are some things that just aren’t done, such as drinking Dom Perignon ’53 above the temperature of 38 degrees Fahrenheit,” the imperial thug says in Goldfinger. “That’s just as bad as listening to the Beatles without earmuffs!”

I wonder how that incarnation would react to the news that Billie Eilish, 19-year-old Californian electropop sensation, has been commissioned to write and perform the next Bond theme. Maybe the nurses could ask him. “THEY’VE GOT THAT BILLIE EILISH OFF OF BAD GUY TO DO THE SONG, MR BOND! BILLIE… OH, NEVER MIND! I SAID, NEVER…”

You can get a decent idea of what superannuated James might think from a glance at responses to the announcement on the “007” Twitter account. There is a great deal of bragging about not knowing who Miss Eilish is (amusing, considering the recent fuss at her admitting to not having heard of Van Halen). Some genuflect towards Baroness Shirley of Tiger Bay. There are repeated urgings for consideration of arch Clarksonian rockers Kasabian. The general sense is of modernity endangering a much-loved British institution. You know the sort of thing? As if some young American divorcée had dared marry into the royal family.

Here’s the annoying bit. In a sense, they’re not wrong. This is not to suggest Billie Eilish can’t deliver an excellent pop tune with an appropriate hint of impending violence. Indeed, it’s hard to think of anyone better qualified for that task. Lana Del Ray was many sane people’s choice, but her weariness is of a more lugubrious stripe. Angel Olsen probably isn’t famous enough. No, Eilish is just right for the task. And, for once, they’ve caught a star while they are in the ascendant. She’s not so scary as her furrowed brow pretends, but she is still of the moment.

There’s your problem. As James’s comments about The Beatles clarified, neither the character nor the films were ever really in (ahem) tune with contemporaneous popular culture. Ian Fleming created the agent in 1953 as a grumpy public-school expellee with an affection for what remained of empire. He got on all right with foreign booze and foreign food, but anyone who’d made the irresponsible decision to be born “abroad” was immediately under suspicion.

Bond never looked so scared as he did entering an African-American bar in Live and Let Die. He was your racist uncle with a gun

Nothing demonstrated the disconnect from changing times more effectively than the selection of Bond themes. Do not forget that, for a large part of the mainstream in the 1960s, even the loveable moptops seemed like dangerous insurgents. The music that shifted attitudes was hard to hear on prime-time television until as late as the 1980s. Cubby Broccoli, the series’ producer, would have been as likely to approve the Rolling Stones as a melange of primal screams and ear-scraping white noise.

Barbara Broccoli, Cubby’s daughter, cannot have believed her luck when Adele emerged in time for Skyfall

In the year of the Beatles’ first LP, Bond went with Matt Monro. When hipsters were disentangling Highway 61 Revisited, Shirley Bassey got her first outing. She was invited back in 1971 for Diamonds Are Forever, while young folk rolled stuff on Led Zeppelin IV and Sly and the Family Stone’s There’s a Riot Goin’ On. Despite Paul McCartney’s then-recent decision to wear argyle tank tops, it seemed daring to put Live and Let Die the way of Wings in 1973. Calm down, Uncle Pete. That nice Lulu was back just a year later for The Man with the Golden Gun. No James Bond theme reached number one in the UK charts until Sam Smith’s soporific Writing’s on the Wall four years ago.

The Bond franchise has been dealing in reassuring nostalgia since Harold Macmillan was prime minister. Barbara Broccoli, Cubby’s daughter, cannot have believed her luck when Adele emerged in time for Skyfall. Reassuring ballads in the style of singers who were already out of date 50 years ago suited the franchise’s reactionary mood nicely.

All of which is by way of confirming that, yes, Billie Eilish probably isn’t in the great Bondian tradition. The producers should, perhaps, have hung on until, like week-old milk or the Duran Duran of A View to a Kill, she had gone on the turn. Yes, Barbara Broccoli this week confirmed that she would happily consider a black replacement for Daniel Craig. But Billie still seems too fresh, too interesting, too current, too alive.

Has anyone thought of digging up Ken Dodd?

Eric Clapton opens up – even on his bizarre racist period
8