Joe Duffy draws out another harrowing tale, knowing it is radio gold 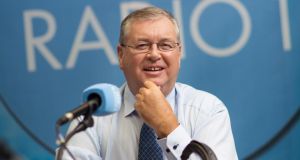 Joe Duffy has fielded a few bizarre calls in his time, but even by his own lofty standards, his phone conversation at the start of Wednesday’s edition of Liveline (RTÉ Radio 1, weekdays) is remarkable.

As flagged by Duffy, the situation faced by caller Rory Bracken is a dire one. A preacher, Bracken has spent 22 days in a Kenyan prison: now out on bail, he awaits trial without money or legal support.

By any measure, it’s a desperate state of affairs, reflected by the host’s concerned tone. Yet from the moment that Bracken asks if he can start by saying a prayer, Duffy must also know that, in purely radio terms, this is manna from Heaven.

Despite his woes, Duffy’s guest speaks with both the pitch and language of a 19th century revivalist preacher.

If I’m guilty of preaching the Gospel, then I’m guilty

“For the people of Ireland who are sick or listening to this programme, I will request you that you allow a very short prayer in the name of Jesus Christ,” he says.

“Off you go, yeah,” Duffy replies tersely, possibly miffed by the implicit correlation of Liveline listeners with illness.

Asked by the host to explain his plight, Bracken continues to spread the good word.

“When I pray on people [sic], miracles happen, Joe,” he announces. “Just go back to the original question,” says an increasingly frustrated Duffy.

Eventually, Bracken describes how, having evangelised in Kenya on a holiday visa, he was detained when he tried to extend his stay: “The charge was that I didn’t have a permit to preach Jesus.”

It all sounds a bit daffy, until Bracken recounts his incarceration.

Locked in a small room with no mattress, sharing his space with sick inmates, lacking his own medication, it’s unsurprising that he calls prison a “hellhole”, though he says he didn’t suffer as badly as others.

After his release, Bracken hired a lawyer, who failed to turn up.

For all this, he sounds most upset by what he sees as a lack of support from “rude” Irish authorities for his predicament.

Amidst his understandable agitation, Bracken also projects the serenity of the true believer, though maybe it’s merely resignation: “If I’m guilty of preaching the Gospel, then I’m guilty,” he says.

After his initial gruffness, Duffy sounds genuinely concerned for his guest, even as tries to mine biographical details. (Bracken says he started his own ministry after gambling and drinking cost him his own family.)

All in all, it’s a memorable conversation, but an uncomfortable one too.

As is often the case on Liveline, Duffy is in the awkward position of drawing out a harrowing tale in the knowledge that it makes for compelling radio. Indeed, listening to Bracken’s perversely mesmerising story puts the audience in a similarly ambivalent role.

The sense of discombobulation is heightened by the apparent triviality of Duffy’s next item, about women wearing pyjamas as daywear. (Maybe the show could have been called “A Prayer before Bedtime”.)

The presenter talks to David, a hairdresser who has barred women in nightwear from his Portlaoise salon. This does not seem a particularly noteworthy development, but it sparks such a response that even Duffy sounds surprised by the amount of impassioned calls on the topic.

One caller, Catherine, thinks that criticising women for wearing PJs during the day is “an attack on working class people”.

She suggest that if “celebrities” wore such attire, “the wealthy” would soon follow suit. Another woman, Chris, takes the opposite view, complaining about women in pyjamas drinking coffee at a Dublin train station with “Oompa Loompa tan all over them”.

Duffy is perplexed by this animosity. “What harm are they doing?” he asks. “They’re hurting my eyes,” comes the reply.

It’s all great fun: Duffy even dubs it “Pyjamagate”.

But the normally careful host gets so carried away that he strays onto the minefield of multiculturalism, when he muses on how some immigrant communities can dress differently from “traditional” Irish styles.

Eoin, who phoned in to decry the daytime pyjama trend, promptly declares his “equal opprobrium” for women wearing burqas: “Those people also have a disrespect for the society they’re in,” he says.

Duffy hits the reverse so hard you can practically hear the gears grinding: “I wasn’t talking about burqas,” the presenter says, somewhat chastened.

Overall, it’s a classic edition of Liveline, underlining how even at its frothiest the show can reveal hidden aspects of the country, much as we might wish them to remain hidden.

A more positive vision of Ireland is on parade on Sunday With Miriam (RTÉ Radio 1), when Miriam O’Callaghan celebrates St Patrick’s Day with a panel of writers, musicians and horse trainers.

As a cross-section of Irish life, this couldn’t be more stereotypical if it came with a leprechaun hat and a clay pipe, but the programme turns out to be both enjoyable and stimulating.

The feel-good factor is provided by the rousing tunes of the Kilfenora Céilí Band and an interview with trainer Willie Mullins, fresh from his triumph in the Cheltenham Gold Cup.

The more thoughtful element comes from O’Callaghan’s author guests, among them Armagh-born poet Paul Muldoon, who speaks effusively about his native land from his home in upstate New York, where it is early in the morning.

“One of the great things about Ireland now and indeed as it’s perceived abroad is that we’re a very inclusive nation,” Muldoon says, contrasting this situation with Trump’s America.

“When I say that we’re four hours behind in the US at the moment, I think we’re certainly farther behind in that regard. The order of the day here seems to be ‘keep people out’.”

This kickstarts an intriguing discussion about politics, society and art.

Poet Paula Meehan describes poetry as “the history of the dreaming”, but equally doesn’t shy away from addressing contemporary events “when history marches in your front door”.

It’s an oddly uplifting discussion, but far from standard flag-waving.

Whether your calling is poetry or prayer, these are interesting times.

Professor Frank Murray appears on the Pat Kenny Show (Newstalk, weekdays) to discuss changing drinking habits among women, only for the discussion to turn to stalled proposals for minimum unit pricing on alcohol.

Kenny suggests the measure “afflicts the less well-resourced”, while Murray says it reduces the impact of alcohol abuse on the most vulnerable, hence is “just and decent”.

This prompts the host, ever keen to display his erudition, to respond by paraphrasing Karl Marx.

Quite what this means is uncertain. Still, high Marx all round.

Eugène Delacroix: Reflections on a revolution in art
8