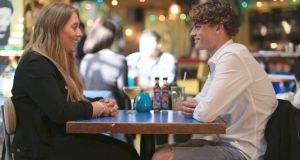 Dinner with My Ex: there is something about witnessing these sweaty-palmed exes that makes the show instantly more relatable and easily familiar

First Dates may be the pinnacle of reality TV dating shows but lately, as the series has worn on, the distinct, unpleasant tang of fakery is evident. Whether deliberately arranging mismatched pairings or calling on social media influencers and oddballs to beef up the dates, it’s become less engaging or emotive and more like a rusty conveyor belt that churns out the same confections and is in dire need of a service.

Luckily a new BBC show has hit upon an intriguing twist to distinguish itself in the overcrowded dating show market. Eating with My Ex, with its simple concept of two former partners meeting to discuss their relationship, was originally broadcast in 10-minute, bite-sized chunks on BBC Three but has now graduated to BBC One for a full half an hour.There’s an illicit quality to it that is reminiscent of the brilliant but forgotten fly-on-the-wall show Diners where viewers could earwig on several different conversations in a London restaurant.

There is something about witnessing these sweaty-palmed exes that makes the show instantly more relatable and easily familiar. The dull chit-chat and bland pleasantries of strangers is dispensed with as dinner plates are immediately plonked in front of the couplings with awkward questions such as “was our sex life good?” boldly emblazoned on them. Juicy, incendiary topics cannot be avoided – which is catnip to nosy viewers.

Obviously both parties have some kind of agenda, agreeing to appear on the show for closure, to get the last word of an ancient argument, or sometimes even to reignite old feelings and emotions. As with First Dates there is an aching vulnerability, but on Eating with My Ex the stakes are higher. In every second episode you encounter a Ralph Wiggum having their heart ripped out by a Lisa Simpson. The series is full of cock-eyed optimists willing to run the risk of being spurned by an ex-lover on television, which is much more hurtful than being rejected by a randomer.

Which is probably why the show is dominated by the dramas of foolhardy young people, living in their own soap operas where a drunken kiss can be the scandal of a WhatsApp group. These freshly-minted romantic voyagers are not yet doused in cynicism, their hearts have yet to crust over with bitterness as they mute and block their way to happiness again.

The show cleverly highlights common issues in modern relationships, the overstimulation that comes with dating apps with more choice causing relationships to end prematurely as the roving eye of Tinder never sleeps. It emphasises the pitfalls in our tech-driven society; several relationships were ended by text. The major take-away is that if you break up with someone via text, that person will despise you forever.

Across the series confused young men are equal parts arrogant and insecure, uncomfortable with emotion. Savannah and Courtney’s dinner descends into a slanging match after Courtney accuses her of being “too full on” for wanting to hold his hand on their first date. Lydia tries to tackle her ex Jake’s toxic masculinity and ends up manipulated into giving him another chance, much to her mother’s disappointment. Part-time rapper Jason swings from bragging about his single life to proposing (via text of course) to his ex, Jodie.

Although not all daters are seeking answers or resolutions, perma-tanned “topless waiter” Alexi wants to meet up with his ex, Megan, to see if she’d be willing to be his “friend with benefits”. A true gentleman, he begins the conversation by telling an incredulous Megan that he was annoyed with her for causing a scene when she caught him kissing another girl because the two (who dated for five months) weren’t “exclusive” . But, reassuringly, he did “like” Megan.

“Did you like when you were kissing that other girl?” Megan asks, downing a glass of prosecco. “I’m seeing someone else anyway,” she sneers and with a bite of her pasta. Alexi’s “no strings” strategy slips away like spaghetti on a fork.

Five lessons of Stoicism: What I learned from living for a week as a Stoic
7