Dancing with the Stars: It’s Frexit for Fred Cooke, like ‘a Lada in a shed full of Mercedes’

Review: The Cork comedian voted off as Johnny Ward, Cliona Hagan and dark horse Mairéad Ronan through to final 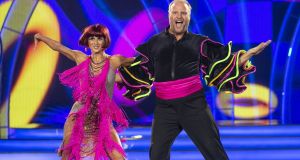 It’s a diddley-eye date with destiny as the Dancing With The Stars semi-final doubles as St Patrick’s Day-themed celebration of Irish music. The short shamrock is alas drawn by twirling comedian Fred Cooke, who is eliminated at the penultimate hurdle and misses out on next week’s grand decider.

Appropriately, the funnyman turns green at the gills – and everywhere else for that matter – as judge Brian Redmond delivers the fateful thumbs down. This follows a surprise dance-off between Cooke and frontrunner Johnny Ward. The Love/Hate star thus qualifies for the final, where he goes toe-to-toe against fellow favourite Cliona Hagan and dark horse Mairéad Ronan.

Who will grab the gong? Despite here placing in the bottom two by public vote the clever cash has to be on Ward, the most consistently impressive hoofer through the series. However, the public loves an old fashioned ding-dong upset and Ronan’s journey from reluctant contestant (as she admits) to dancefloor queen tugs the heartstrings – so don’t rule her out.

Country singer Hagan is first out tonight, performing a Viennese Waltz with Robert Rowinski’s to the maudlin strains of The Corrs and Runaway (what you want to do when you are surprised by The Corrs on radio, oddly enough).

Hilariously, Rowinski thinks the band is named “The Corns”. If only Robert, if only. Hagan confuses us further by arriving dressed as Elsa from Frozen. More seriously, her scarf develops a mind of its own halfway through and makes for the Wicklow Mountains.

“Your swing was very lovely,” says Loraine Barry, trying to be kind. “My heart went out to you,” adds Julian Benson, done up like a St Patrick’s Day float so that you half expect a frostbitten American marching band to come tramping behind him throughout the broadcast. “Overall you were magnificent to watch.”

“You did really well,” says Brian Redmond, praising the pair for keeping on track as the scarf goes awol.

Then it’s striving funnyman Cooke, who must deliver a foxtrot to Van Morrison’s Brown Eyed Girl. “A Lada in a shed full of Mercedes,” is Cooke’s appraisal of his record on the series. His dance partner Giulia Dotta would appear in broad agreement, revealing that she expected to be eliminated in last week’s dance-off.

Cooke has dressed as a postmaster for the evening, with Dotta seemingly done up as a giant envelope (if there’s a theme here you’re going to have to explain it a tad more explicitly, Fred). “Great fluidity . . . but we did drop a few letters here and there,” says Julian Benson.

“There were bits . . . that were a little bit more snail mail than first class,” adds Brian Redmond, though he goes on to praise Cooke’s “frame”. He scores 21 – incredibly just one behind early pace-setter Hagan.

A far sterner task awaits Mairéad Ronan and John Nolan who must jive to The Blizzards (not even the Blizzards would want to jive to the Blizzards). Even weirder are the Warholian negative prints of Ronan in the background. It’s all a bit uneven, as the judges pick up on.

“It lacked a little bit of bounce,” says Brian Redmond. “There were highs and lows in the music,” says Loraine Barry. “The real problem tonight is you’re not feeling it, you’re not giving it . . . you’ve got to be flirty.”

“I can’t be flirty! It’s not me,” says Redmond. “I agree,” shoots back Barry. “Shake it to fake it – jive it to survive it.” Behold a judge who won’t budge when push comes to shove. Barry’s reward is 24 – impressive given the high stakes and also the fact she’s had to dance to the Blizzards.

Last out, Johnny Ward, with Emily Barker, contributes a sizzling American smooth to Dermot Kennedy, who you’ve never heard of but sounds a bit like Ed Sheeran if Ed Sheehan was strapped to a dentist’s chair and forced to listen to Mumford and Sons for 12 hours.

“The second half – it got a little bit interrupted,” says Barry, ever so gently chiding Ward for recycling his favourite moves. There’s a surprising critique, too, from Redmond, who laments Ward’s “Desperate Dan Chin”. None of which is enough to stop him roaring into the lead with a score of 27.

Paddy’s Day or not there’s an entire two hours of that sweet, sweet, Sunday night airtime to fill. And with just four celebs standing (or wobbling a bit in the case of Cooke), they are required to hit the dance floor all over again.

Part two, however, is comparatively classy and also – yes you can come out from behind the couch now – lighter on The Corrs and friends. Hagan and Rowinski’s cha cha to their heart’s content to Aretha Franklin.

“This was a no-frills cha cha . . . at one point I thought you were about to pull out a whip,” says an approving Julian Benson. “Great energy . . . great hip actions,” agrees Redmond. Hagan receives 28, though she seems even more delighted to have bagged that crucial Daniel O’Donnell endorsement during the week.

Next Cook-ie monster – he’s not a monster obviously but it does rather trip off the tongue – does a salsa to Best Years of our Lives by Modern Romance (is Dancing With the Stars the best year of Fred’s life – and should he be happy about that?).

The dancing is fine but it’s the frilly sleeves adorning Fred’s black corset that really take the breath away. He looks like an Archbishop halfway through transforming into his super-hero alter-ego (The Ecumenical Hulk?). “No Frexit,” say Dotta. “Everyone wants Fred in the final.” His reward his a score of 24.

How do you top that? DWTS’s answer is Mairéad Ronan and John Nolan waltzing to You Are the Reason by Calum Scott and Leona Lewis.

“I didn’t want to take [Dancing With The Stars] on and do rubbish performances every month,” reveals Ronan. “It was my husband who convinced me to take it on.” She’s clearly glad she did and receives her first clean sweep of 10s.

The real excitement is at the end as Ward and Barker rip through a paso doble to an orchestral version of Led Zeppelin’s Kashmir. It’s energetic and Ward goes above and beyond by wearing one of Michael Flatley’s Bacofoil pixie jackets. But how does he get away with having two additional hoofers help out?

“I don’t know what to say,” says Julian Benson. “The opening was box office.” “You’re like Zeus from Superman,” adds Nicky Byrne (there’s a Zeus in Superman?). He scores 28.

The dance-off follows, with Hagan and Ronan once again having the luxury of watching the torture from the sidelines. All three finalists would make for a plausible champion. But on St Patrick’s night, as we recline on our sofas rather than run a gauntlet of green beer and boozy bonhomie out on the streets, it’s clear that the real winners are us the viewers.