Fred and Rosemary West: The clues were all there, for 20 years

Derek and Wendy Thompson describe their experience of a former employee, British serial killer Fred West, as part of the Fred and Rosemary West: The House of Horrors documentary. Video: Virgin Media 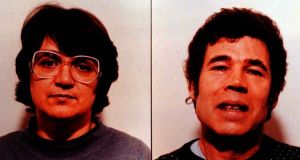 Looking back at the disturbing case of the serial killers and sexual sadists Fred and Rosemary West, the distress of their crimes is compounded by the fact they avoided notice for so long.

“I’ve come to the city of Gloucester to find out how Fred and Rosemary West could escape detection for more than 20 years,” intones Trevor McDonald, the retired newsreader.

The programme, shivering with atmospheric music, presents McDonald as a kind of cold case investigator, shown at intervals frowning at a heavily annotated corkboard, where red tape joins the dots of photographic clues.

But from the distance of 25 years, that mystery is at once more unsettling and somehow banal: Fred and Rosemary West, who killed at least 12 women (there may be more, undiscovered) over the course of 20 years, including their own daughters, seemed to scatter clues liberally.

It’s just that too many people were able to overlook them.

Two of the lodgers the Wests took in disappeared without trace, about whom they merely said they had moved on.

Rosemary advertised her services as a prostitute publicly in a local magazine. In 1994, just before their arrest, their eldest child, Heather, had not been seen in six years.

Their remaining eight children had been taken to hospital 31 times in 20 years – one of them with an STD. How many alarm bells had to ring, treated as indifferently as the whine of a car alarm, before the Wests were found out, almost by accident, in 1994?

The only thing necessary for the triumph of evil, wrote Edmund Burke, is for good men to do nothing.

But suburban anomie, public reticence and the depredations of poverty can play a part too. One lodger, asked how she could live in as squalid a dump as the West house, replied, “It’s cheap.”

Otherwise, we are told frequently in the programme – by journalists, forensic psychologists and solicitors – how “normal” the home life of Fred and Rosemary West appeared from the outside, as though to reassure us, or perhaps themselves, that everyone was duped by conniving and skilled psychopaths.

One woman, Caroline Owens, who survived an early horrific rape ordeal at the hands of the Wests in 1972, did report them, but declined to relive the trauma again by testifying in court (they were fined instead for indecent assault).

A former lodger, disturbed one night by their children’s screams, resolved to leave the house but never reported her experience: “Who was going to believe a 17-year-old?” she asks McDonald today.

In the end it took just one foster mother to believe a much younger girl, a daughter of the Wests in her care, who spoke idly of an elder sister, “buried under the patio”.

Eventually nine dismembered bodies were uncovered beneath their home on Cromwell Street, including that of Heather West, her half-sister Charmaine, and Fred’s first wife Rena.

Although Fred confessed early, in what McDonald calls “a bizarre mix of truth, fantasies and lies”, his priority seemed to be to exculpate Rosemary, before he hung himself.

Rosemary, relieved, might have escaped conviction, but Owens was this time determined to testify, while forensic evidence painted a damning picture. Rosemary West was jailed for life.

The programme avoids repeating some of the more sordid details of their crimes, the shock of which has not been diminished by time, reassuring us that reporting standards, shared databases and police training make it “unlikely the Wests could get away with their crimes today.”

Perhaps that’s true; that the circumstances that allowed the Wests to perpetrate their crimes were as dreadful and unrepeatable as their own monstrous compatibility.

But society will have needed to change too, ready to respond to the early signs of horrors tugging at its sleeve, without being afraid to call them out.