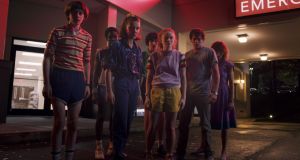 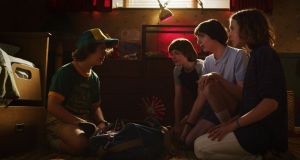 The children of Stranger Things face a terrifying monster from the Upside Down in the first full trailer for the new series of the hit sci-fi adventure.

Set in summer 1985, as the residents of Hawkins, Indiana, frolic in the pool, the footage for the upcoming episodes promises “one summer can change everything”.

The trailer from the show’s makres, the Duffer Brothers, opens with the group surprising Dustin (Gaten Matarazzo) with a welcome home banner after he is spooked when all his remote control toys start moving in the same direction.

As they hide in the shadows waiting to jump out at him, it can be seen that Eleven (Millie Bobby Brown) has a nose bleed.

Despite the high jinks it becomes clear things have changed as Mike (Finn Wolfhard) can be heard saying in voice-over: “We’re not kids any more. What did you think? We were just going to sit in my basement all day and play games for the rest of our lives?”

The clip also shows the return of Winona Ryder as Joyce Byers and David Harbour as Sheriff Jim Hopper, who can be heard telling her: “It’s important to me that you feel safe. I want you to feel that this can still be your home.”

The trailer reaches a climax with the appearance of the monster baring its teeth and roaring.

Here are five things we’ve learned from the trailer

More than anything, the trailer serves as a roll call for everyone you’ve come to know and love. The main cast are present and correct, obviously, but so are all the tangential figures, like Brett Gelman’s sleazy PI and Dacre Montgomery’s raging douchebag. Better yet, we get briefly introduced to two new characters: Cary Elwes’s Mayor Kline (probably fulfilling the Matthew Modine/Paul Reiser role of Guy From The 80s Who Might Be Evil) and Jake Busey, glimpsed briefly playing The Buseyest-Looking Human Being in All of History.

2. The cast aren’t kids any more

We know this because, well, look at them. The kids are now deep in the clutches of puberty – Gaten Matarazzo is coming up for 17, Caleb McLaughlin will literally become an adult this year – and they have the long faces and gangly limbs to prove it. It’s wise of Stranger Things to acknowledge this growth, but as yet nobody knows how much it will feature as a storyline.

3. They might want to return to the Upside Down

Early in the trailer we see the gang erecting a vast aerial in the middle of a field. Could this mean they’re trying to contact someone? Could it be that they’re trying to reach across and form a new portal into the Upside Down? It’s either that or Eleven wants to phone those numpties she met in that terrible one-off episode from series two, and that honestly wouldn’t bear thinking about.

4. There are new dangers to face

Although the Duffer Brothers have claimed that this new series will be much smaller in scale than its sprawling predecessor, it still looks as if there’s a ton of stuff to be scared of here. There’s a gun-toting assassin, a bloke in a Slipknot costume, a disappearing bathtub, an enormous screaming pink Demogorgony-looking buffalo thing and – as previously mentioned – Jake Busey looking like someone has distilled his entire ancestral DNA into a single human form. Honestly, it’s hard to know which of these is the scariest.

5. The Dustin/Steve relationship is stronger than ever … for now

But forget all that. Forget the baddies and the sci-fi and the nostalgia. There’s only one reason anyone will watch Stranger Things 3, and that’s to get more of the weirdly endearing friendship that developed between Dustin and Steve at the tail end of the last run. The producers have gone in all guns blazing this time; not only do the pair look like actual soul mates in the trailer, but they’ve dressed Steve up as a funny little sailor with the word ‘ahoy’ written on his hat. It is adorable, and there will be a million GIFs of it by the weekend. If only the trailer didn’t also contain that one shot of Steve screaming in agony as a mysterious substance is injected into his neck. It’d be a shame to tear something this pure apart. – Gua\rdian, PA

Stranger Things will return to Netflix on July 4.