Fair City actress Clelia Murphy and her dancing partner Vitali Kozmin have become the latest celebrity couple to be eliminated from Dancing with the Stars in Sunday night's Eurovision-themed quarter final. Video: RTE 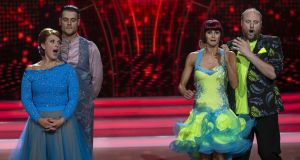 The moment Clelia Murphy was voted off Dancing with the Stars after a dance-off with Fred Cooke. Photograph: Kyran O'Brien

Just when you think Dancing With The Stars can’t get any kitschier… it’s Eurovision week. So let’s get the nul points gag out of the way immediately and bid a teary adieu to Clelia Murphy, eliminated following a dance-off with Fred Cooke.

It’s a bittersweet departure for the former Fair City star, who arguably drew the short-straw in swaying to the waterfall of saccharine that is Dana’s All Kinds of Everything.

She exits after Loraine Barry uses her casting vote to keep the likeable Cooke in the competition – his dancing is still mediocre but sheer jolliness delays the inevitable. Still, Murphy can be proud of what she has accomplished in reaching the quarter finals and was at one point even regarded as contender.

The Once and Future King of Trans-Continental sing-offs, Johnny Logan, opens the night belting out his hair-dryer tearjerker Hold Me Now. Around him pro dancers hoof and pirouette as Logan sways a bit and wobbles his lips.

This is followed by some top-level shade-throwing from Jennifer Zamparelli who jokes about the time Ireland sent a “singing turkey” to Eurovision. Nicky Byrne, physically adjacent, but as usual a zillion miles away in terms of on-screen chemistry, looks hurt. She insists – not too hard – that it isn’t a dig at the crestfallen Westlife man and his 2016 bid for Eurovision glory (the song, as memory serves, was called Flopping Without Wings).

Then, it’s into the action as Cooke and Giulia Dotta samba to We Got The World Tonight by Micky Joe Harte. Cooke’s continued participation in DWTS is a matter of controversy. He really should have been shown the door by the judges when he took a tumble during his dance-off two weeks ago. However, he’s made the most of his second chance and attacked Micky Joe Harte – calm down, it’s a metaphor – with palpable zeal during the dance-off.

“It’s a classic… Mickey Joe Hart,” says Cooke, the first person in history to ever utter those words in that order when explaining to pro dancer Dotta why We Got The World means so much. Her confusion is ratcheted up further when Harte himself turns up to bash out the chorus during rehearsals.

“Some lovely hip action… however I needed a little more articulation of the feet, the ankles, the knees,” says judge Loraine Barry (to Cooke, not Mickey Joe Harte). “You had the whole audience in your hands tonight,” adds Julian Benson,. “You came out and gave the best dance you could.” That’s a compliment, isn’t it?

“It was Pancake Tuesday during the week – and that was the flattest samba,” chimes in Brian Redmond, who is still fantastic at putting in the boot while looking like putting in the boot is the last thing he wants to do. “Not the strongest Latin dance we’ve seen you do in a while.” The total is a mid-table 17.

They are followed by Johnny Ward and Emily Barker, doing a contemporary ballroom dance to Rise Like A Phoenix by Conchita Wurst. Ward gave the season its most emotional moment last week when dancing the day after his father died and here he once again distinguishes himself.

“It’s the hardest time of my life,” says the actor in a piece to camera. “This is a distraction in so many ways.”

He puts in a molten performance – assisted, it should be acknowledged, by a convincing mock-up of a volcano in the background (can we make it a rule that Dancing With The Stars always has volcanos in the background?). “To put all that feeling of depression and pure rock bottom into a dance like that… it’s amazing,” he says as he and Barker bring their stormy twirl to an end.

“Johnny you smashed that … in contemporary ballroom it’s all about storytelling, conveying emotion… box office gold,” says Julian Benson, who has to send an assistant out to the shops as he’s running low on superlatives. “That could have been the opening sequence of a Bond movie,” adds DWTS’s resident Ernst Blofeld, Brian Redmond.

“There’s so much you want to do hit a wall, lash out,” says Ward of his bereavement. “It’s great to be able to put that energy into a dance.” He scores three straight tens – the second full house of the season and his first.

From there it’s back to a dim and distant past when Britain was the toast of Europe as Cliona Hagan and Robert Rowinski trot out a Charleston to Sandie Shaw’s Puppet on a String. But, hang on, it’s all gone a bit frightening, with Hagan doing her bit as a dead-eye marionette. Stop Cliona, you’re scaring us!

“It was good, but we’re at a point in the competition where we need great,” says Redmond. “What we’re going to complain about is that it just wasn’t enough… it needed more,” nods Loraine Barry. She scores 25.

After that it’s a case of twee shall overcome as Fair City’s Clelia Murphy dances a waltz with Vitali Kuzmin to All Kinds of Everything. After placing in the bottom two last week, Murphy is becoming queen of the dance-offs. Seven days ago, she almost crashed out when Kuzmin fell during the survival dance. So she has a lot to prove.

She is praised for her poise by Loraine Barry, but also called to task for a flub in the middle (honestly, the rest of us missed it). She duly scores a very flat 19.

From the schmaltzy to the banging – Eurovision in a nutshell essentially – next it’s dark horse Mairead Ronan doing a paso doble with John Nolan to Loreen’s Euphoria. The distinguishing feature here is John Nolan borrowing Peter Stringer’s see-through shirt from two weeks ago. Please give it back to Peter immediately, John. He’s out in public somewhere wondering why it’s so breezy.

Ronan puts in a solid shift and is applauded by Benson for her excellent arm position. “This was an ice-cool, ice queen performance that I absolutely loved,” says Brian Redmond. “I could see your love of Eurovision. You’d started to plateau – you’re certainly right back on track.” She receives a not-at-all-shabby 27.

By way of time-filler – it’s a long way to to public vote – Eurovision fantastic Ronan is then treated to a Euro quick quiz by Nicky Byrne (Una Healy sang backing vocals to Brian Kennedy in 2006 etc).

As if that wasn’t enough – and really, it is enough – there’s a cameo from “Mr Eurovision” Marty Whelan. He first act is to rule himself out ever participating Dancing With The Stars. Then he and dancer Kai perform a two-step. “You’re like a bad boy band!” says Nicky Byrne, who is pleased with himself for thinking of that.

And then, because there are 30 minutes still to kill until the voting lines close, they crowbar in another group dance – featuring all the contestants, body popping to Buck’s Fizz. The gimmick here is that couples are eliminated one by one by the judges, until only one pair of hoofers remains. Clelia Murphy and Fred Cooke are the first celebs out, with Johnny Ward and his blinding white trousers – I see them still when I close my eyes – last dancers standing.

“How does that feel?” ask Zamparelli. “Hufff….!” says a breathless Ward, who has taken it to the limit one more time. It’s another fantastic showcase for his twinkling toes. But why didn’t RTÉ commit to the bit by making the dancers stretch their limbs to Irelande Douze Pointe? A paso doble to a pogoing plastic turkey… that’s how you give licence payers value for money.

Cat Power: ‘I was never an alcoholic. I was suffering from extreme depression’
9