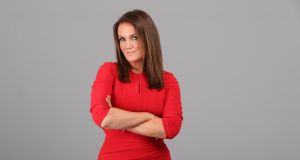 Ciara Kelly of Newstalk: in her first week Kelly has already left her searing stamp on her lunchtime slot

It’s a new show fronted by a rising presenter with a voice and backstory that stand apart from most of her career-broadcaster colleagues’. Yet as Ciara Kelly embarks on her inaugural week as host of Lunchtime Live (Newstalk, weekdays) there are times when proceedings have a familiar air. Discussions about immigration fears? Present. Indignant outbursts? Check. Rugby conversations? Uh-huh.

Kelly may have taken over the midday slot from the ousted George Hook, but her predecessor’s predilections and preoccupations can still linger in the air, at least judging by some of the early fare on show.

A general practitioner by profession, who also served her time as Hook’s resident medical expert, Kelly says she wants to make “fearless and compelling radio”. But for someone looking to strike out bold new territory, Kelly opts for a well-trodden path on her first day, as she tackles the subject most associated with Hook: rugby.

There is a slight twist. In the light of Senator Terry Leyden’s remarks that rugby is not a suitable sport for women, Kelly invites the former Ireland captain Fiona Coghlan to rebuff this notion. This Coghlan does, expressing her disappointment in such views’ being held in a “seat of power”, a term that maybe overestimates the significance of the Seanad.

As controversies go it’s a bit of a damp squib, as Kelly admits that Leyden has already conceded that his viewpoint is ill informed. Nonetheless, the host believes the affair raises a wider question for her guest, and indeed for herself. “Do you as a woman get sick of being told what you should and shouldn’t be doing by someone who has no notion of what women are and aren’t capable of?” Hearing two women ponder this depressingly persistent question shouldn’t seem novel, but on Newstalk’s male-dominated airwaves it is.

Similarly, Kelly’s interview with Emma Coffey about immigration controls is less sulphurous than under the ancien regime. Coffey, a Fianna Fáil councillor from Louth, advocates a hard Border after Brexit to prevent uncontrolled migration from the UK.

But it’s an almost disappointingly measured encounter, with Coffey suggesting controls are inevitable, as the Republic will be a gateway to the wider European Union. If only all discussions on the subject were conducted so rationally. (That said, Kelly’s use of the phrase “rat run” when it comes to immigration is unfortunate.)

On Wednesday, however, Kelly is in a far more incensed mood, as she reflects on the 2½-year prison term handed down to Tom Humphries, the former Irish Times sportswriter convicted of child sex offences.

Kelly does not hold back in her contempt for both Humphries – the presenter unapologetically recounts the foully explicit language Humphries used to groom the young teenage girl he abused – and the “disgustingly lenient” sentence. (For the record, I knew Humphries and his family, who reported his crimes.)

Her voice almost shaking with rage, Kelly challenges the opinion of the judge, Karen O’Connor, that Humphries’s fall from public grace was a mitigating factor. “I would suggest that his eminence and privilege and status, which he abused to manipulate and groom and coerce that girl, was an aggravating factor,” she says.

Kelly also excoriates those who she feels underestimated his crimes, such as Eamon Dunphy, who said he originally assumed Humphries committed the more “benign” crime of “underage sex”. “I’m sorry to rain on your parade, but underage girls do not fancy auld lads,” Kelly says. “It has always been abuse.”

Kelly’s fury is bracing in its ferocity and sincerity. She may steer close to enemies-of-the-people-style populism when she says that she doesn’t trust the judges to punish child sex offenders, but the real focus of her concern is that the light sentence sends a disheartening message to abuse victims. This point is underlined by Kelly’s quietly harrowing interviews with women who have been sexually attacked.

All in all its unnerving and uncomfortable listening. It’s hard to imagine Kelly’s male peers bringing such a viscerally felt viewpoint to the subject

Máiría Cahill, who was raped by an IRA member as a teenager, is one of those recalling their trauma after being abused, reminding listeners of the sickening human experience behind the headlines.

All in all it makes for unnerving and uncomfortable listening, but given the grim enormity of the crimes that’s only fitting. It’s hard to imagine Kelly’s male peers bringing such a viscerally felt viewpoint to the subject. It’s only her first week, but Kelly has already left her searing stamp on the slot.

Despite its dramatic title, Documentary on One: Richard Hayes, Nazi Codebreaker (RTÉ Radio 1, Saturday) seems almost gentle in comparison. This is partly because the eponymous protagonist of Marc Mc Menamin’s programme is no one’s idea of swashbuckling secret agent: he was for years the director of the National Library of Ireland. But as it turns out Hayes played a vital role in the war effort of both neutral Ireland and Allied combatants, by cracking the ciphers used by German agents.

Coproduced by Donal O’Herlihy, the documentary places Hayes’s work in the context of the hotbed of espionage and intrigue that was Dublin during the second World War: a secret transmitter in the German embassy threatened neutrality, prompting the Irish Army’s intelligence section to call in the gifted Hayes. Additional spice is provided by the cat-and-mouse encounters between Hayes and Hermann Görtz, a captured German agent who was smuggling coded messages out of prison.

The story is occasionally oversold, with much atmospheric music and slightly forced cliffhangers: Mc Menamin’s description of “the dashing Nazi spy versus the genius Irish librarian” is an unlikely tag line for a wartime thriller. But it’s an entertaining yarn, uncovering an unusual tale amid the war’s well-known narrative. Bringing a fresh angle to a familiar subject isn’t easy, but it’s worth doing.

Broadcasting from Cork on Monday, Ryan Tubridy (RTÉ Radio 1, weekdays) remarks on a newspaper photograph from the reopening of Páirc Uí Chaoimh. “If it was in black and white you’d believe it was 1952,” Tubridy says. “There are 40 men on the platform, not one woman.” Chuckling incredulously, he suggests the GAA think about optics, at the very least. “But the park is beautiful, and I believe women are welcome into it every second Sunday.” It’s a gag, but, as Tubridy realises, it’s no joke either.