Applications are open, but there won’t be one for everyone who wants to be in the audience 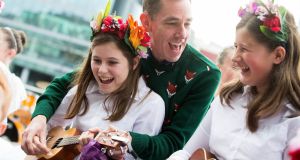 RTÉ has opened applications for Late Late Toy Show tickets. While there will be many more than one goodie for everyone in the audience for the annual TV toyfest, there is only a limited number of studio seats for the broadcast on December 1st.

Last year there were more than 140,000 applications for tickets to be in the 200-strong studio audience of what is often Ireland’s most watched television event of the year.

Audience members get to see young Irish performers, enjoy the latest toys up close, and are guaranteed to leave with a large stash of goodies.

Last year’s Jungle Book-themed Late Late Toy Show had a total TV audience of 1.57 million people (including recordings and playback), making it the second most watched programme on Irish television this century.

Last year TV3 sought to emulate RTÉ’s long-running toy show by hosting one its own alternative. TV3 has no plans to produce one this year.

Late Late Show host Ryan Tubridy said today: “I cannot tell you how often I am asked about Toy Show tickets. It really is quite extraordinary how popular they are. I am asked about them everywhere I go, and the worst part about it is that I have to disappoint, which I hate to do. My best advice is to get those applications in good and early and keep your fingers crossed.”

RTÉ stress those who want to be in the running for tickets to the Late Late Toy Show must apply through the website: rte.ie/latelatetoyshow. Applications via social media or email do not count.

Regional auditions for performers on this year’s Late Late Toy Show kicked off on Monday October 23rd at the Clayton Hotel in Cork, starting a country-wide trawl for talent for the annual TV show. Putting together the cast of young performers every year is a big operation for the producers.

Over three days, the Late Late team sees hundreds of hopefuls among Ireland’s young singers, dancers, musicians and performers. This year’s regional auditions are in Cork, Galway and Mullingar, and they are expecting young performers from all over Ireland.

The auditions are invitation-only, following thousands of applications to the show over the summer.

The team says it’s looking for “fun, talented performers” for some of the night’s big set pieces as well as toy demonstrators with the potential to charm home audiences while chatting to host Ryan Tubridy.

Late Late Toy Show producer Nigel Power said: “There have been some brilliant kids on the Toy Show over the years, delivering really memorable performances. We’re confident that we are going find some true stars in among this year’s auditionees and we’re really looking forward to seeing what they can do.”

Tickets are issued in a random lottery. Those who secure a seat will be notified closer to broadcast.