Looking to fill the gap left by Serial? This podcast fits the bill 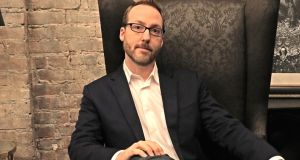 A giant of podcasting: Aaron Mahnke has been on the digital airwaves since 2015

Lore
Episode 8: The Castle
Aaron Mahnke’s series of bite-sized explorations of history and the unexplained is a giant of podcasting, and has been on the digital airwaves since 2015. This episode is one of my favourites. The first half is a procedural look at the deceptions and crimes of Dr Henry Howard Holmes: an insurance fraud, polygamist and murderer.

The second half reveals the true extent of his darkness, embodied in the architecture of a building he bought and operated from, an old hotel. The episode begins like a history lesson, a study of true crime, but ends somewhere shocking and dark. The last few minutes are particularly chilling. Still, there is a lightness to how Mahnke describes the murders, which prevents the subject matter from becoming too grim.

At 22 minutes, it is tiny, fascinating and terrifying: just about a perfect formula. The soundscape is oddly soothing – which may test a listener’s focus – and the story leaves a lingering sense of suspicion about what is truly going on behind the closed doors of our neighbourhoods. Listen to it in broad, stark daylight, surrounded by trustworthy people who are definitely who they say they are.

Hello From The Magic Tavern
Season 2, Episode 32: Dark Lord’s Birthday
This wild, raucous improv podcast is fully Lord of The Rings by way of Monty Python. Arnie Niekamp fell through an interdimensional hole in the back of a Burger King into the magical land of Foon and broadcasts a podcast from a tavern there, and has been for two years now. Usidore the Blue, a wizard, and Chunt, a shapeshifter, are his two companions and guides.

This most recent episode takes place at a new juncture in his journey: the birthday party of the most malevolent force in the land of Foon. Because of the exceptional skill of the actors and comics who play the residents of this magical land, it is almost shocking how easy it is to listen and laugh along.

Even for listeners tuning in this late in the series, Niekamp gently and comically explains the background story, as though laying out a game with precise rules and established boundaries. One thing to note: this episode is fully NSFW and occasionally a little gross: but the running, constantly unfolding jokes make it worth holding on. Besides, that’s what headphones are for.

Heaven’s Gate: Episode 1, The Seekers
ITunes is riddled with true crime podcasts, documentarians and amateur private detectives. All of them are by and large shooting for the astronomical success of Serial. Listeners love the tension and unravelling of a crime, the catharsis of a villain pinned down. Heaven’s Gate is a little different: it looks at a mass suicide of 39 people in 1997.

Narrated by Glynn Washington of gargantuan storytelling podcast Snap Judgement, the audio archive excerpts in the early part of the episode are almost unsettling: a stark contrast against Washington’s warm storytelling. Still, the interviews with surviving members of Heaven’s Gate are a fascinating insight into what it is that makes a young person join a cult. Some of the stranger details are enough to make a listener deeply curious as to what comes next. It’s best listened to while maintaining a firm sense of your place in the universe.