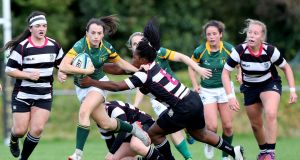 Fianna Fáil senator Terry Leyden has said he regrets comments he made last week suggesting rugby is bad for women’s “health and wellbeing.”

As reported in The Times on Monday, Leyden claimed he had read research which said rugby was not recommended for young women.

Leyden made the comments to communications minister Denis Naughten, during a discussion on the move to make a number of sporting events - including the women’s Six Nations - free to air.

He said: “I am not a doctor, but it’s very rough. It is a bit more physical than soccer or gaelic football. There are inherent risks in to physical sports. . .

“I’m just saying, be careful. I don’t want to see anyone endangering their health and wellbeing.”

He went on to say: “Funnily enough I am not a great advocate of women’s rugby, I think there are certain games more suited to women, and I do not mean to be discriminatory.”

Leyden released a statement on Monday apologising for his comments, saying: “I regret the offence caused to Women’s rugby by my recent comments. I have been contacted by a number of people regarding the participation of women in rugby and realise that my point of view was ill informed.”

Leyden’s comments came shortly after the IRFU announced its decision to no longer employ a full time women’s coach - a move which has given birth to the ‘#Legacy?’ wristband campaign.

Leyden has now given his support to the campaign, which protests against the IRFU’s “lack of respect and ambition” for the women’s game in Ireland.

He said: “I have also been made aware by several people of the recent decision by the IRFU to downgrade the position of Ireland Women’s team head coach to a 6-month-contract on a part-time, casual basis.

“I fully support all players and this week, players both male and female across Ireland and the UK are wearing wristbands that read ‘LEGACY’, calling into question the legacy the IRFU want to leave women’s rugby with, just after hosting the World Cup.”