Stranger Things catch up: We turn it back to Eleven

Ahead of the return of the Netflix hit, here’s how we left things in the town of Hawkins

The cast of Netflix's 'Stranger Things' hit the red carpet in Los Angeles on Thursday (October 26) to promote the second installment of the popular 1980's throwback supernatural mystery series. 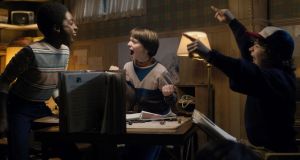 Anyone for Dungeons & Dragons?

Comparing notes with a friend recently, we were both mildly alarmed by how little we remembered from Stranger Things. It was slightly telling: last year’s hit Netflix “creature feature”, set in American suburbia, is stitched together from memories itself, heavily indebted to 1980s sources.

The scrappy team of kids who lose one friend, Will, in paranormal circumstances, and make another, named Eleven (the terrific Millie Bobby Brown), in similar circumstances, are dead ringers for similar bands of kids in ET, The Goonies or Stand By Me. The preternaturally aware Eleven is a girl with telekinetic abilities who escapes a secret government scientific facility, recalling several gifted outsiders from ET to Yoda.

That militarised science lab had opened a door into a kind of submerged underworld, called the Upside Down, from which a ravenous monster emerged to stalk children, teens and adults – usually attracted by the scent of blood – like Freddy Krueger, Poltergeist, or even Jaws.

For anybody firmly over the age of 30, the show left you soggy with nostalgia for 1980s Spielberg and Stephen King; a slickly realised feat of déjà vu. Was it any wonder that the details of Matt and Ross Duffer’s show would disintegrate into the mists of what we had already seen?

To be fair, Stranger Things never really aspired to a sense of permanence. It ended as it began: with an excitable, 10-hour game of Dungeons and Dragons between school friends. That spell of fantasy is just two hours longen that it takes to watch all of Stranger Things, which seemed to follow the game.

“The Demagorgon, it got me,” Will admits sadly, a few minutes before he is gotten in real life by a Demagorgon. In this adventure, the kids are their own showrunners.

In between those two games, a fruitless hunt takes place for the missing Will, much to the distress of Winona Ryder’s increasingly frayed single mom, Joyce: a hunched meme of maternal mania. She soon turns to paranormal methods of communication, assisted by Will’s older loner brother, Jonathan, and the unconventional detective efforts of schlubby small town cop, Hopper (David Harbour).

Eleven eludes capture by hiding with Will’s friend Mike, assisting the gang against playground bullies and governmental spooks with her Force-like abilities.

And Mike’s comely sister, Nancy, besotted with her total douchebag boyfriend, loses her virginity to Steve and her best friend Barb to the Demagorgon early, in events that are painfully related. Barb’s tragic fate is almost completely ignored by everyone except the internet. Eventually Nancy is fighting back to back with the lovelorn, soulful Jonathan.

The plot is uncomplicated, a lesser concern than the studious visual references, divided evenly between three milieus: the awed wonder of children; the fidgety awakenings of teenagers; and the frantic worries of adults.

They all cross frantic paths in the last episode, in which Joyce and Hop journey deep into the Upside Down – a gloomy alternative reality of floating particles, crawling with tendrils – to rescue Will.

Meanwhile, in the Right Way Up, Jonathan, Nancy and – accidentally – her douchebag boyfriend Steve summon the Demagorgon in an effort to destroy it.

Wounded, it stalks the kids, holed up in the school, themselves hounded by Mathew Modine and government spooks. Confident in her psionic powers, Eleven gorily fends off the military, and, in an heroic act of self-sacrifice, finally takes out the Demagorgon and herself, disintegrating together into a drift of black soot.

The show concludes snugly with something like restored normality, under the glow of Christmas lights and carols. But not everything has settled. Alone in the bathroom, the returned Will vomits up an otherworldly slug, and slips, for one menacing beat, back into the Upside Down. Has he Come Back Wrong? And for whom is Hopper leaving pieces of cake in the forest near his cabin: is it the junk-food craving Eleven? Who can say? That is the end of season one: Stranger Things has happened.