If I angle my screen, no one can see I'm watching Mamma Mia!

Why have you all kept this glorious megahit - featuring Meryl Streep, Greek slaves and all three kinds of man - from me 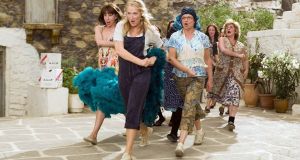 This week I learned four things.

3) Mamma Mia! (I; the I was redundant until recently) is available to watch on Netflix. And . . .

4) If you sit near the window and angle your computer screen in a certain way, no one can see you’re watching films in the office.

Frankly, I can’t believe I never watched Mamma Mia. I knew of this film largely as an industry-wide practical joke played on Pierce Brosnan in order to trick him into singing. And yet, somehow, I still hadn’t seen it. So I watched it at work, all the time pretending to be doing some deep-dive research for an article on government corruption.

Let me tell you about it so you’re up to speed for the upcoming Cher-ful sequel.

Amanda Seyfried, aka Sophie, who is basically two enormous eyes embedded in a human host body, lives upon a Greek island with her mother, Meryl Streep, and a host of indentured Greek servants who dress like it’s 1950.

On the eve of her marriage to a professional Harry-Styles impersonator, Sophie wonders aloud who her father is. Luckily no one informs her that Meryl Streep can procreate through pathogenesis, like Zeus or certain bees, otherwise there’d be no story.

She tells her friends, two forgettable beige blurs who serve as convenient exposition-bait, that she dreams of meeting her father. This is the type of film in which, after someone has a dream, they will instantly begin singing an Abba lyric to the same effect. “I have a dream,” she sings.

Sophie steals her mother’s teenage diary and summons three possible progenitors to her wedding. They are Colin Firth, Stellan Skarsgard and Pierce Brosnan. All three kinds of man. Their distinct personalities are established on a comedic boat ride to the island.

Two other amazingly good middle-aged actors also head for the island. They are Christine Baranski, playing a wealthy divorcee, and Julie Walters, best-selling author of a (presumably) cannibalistic cook book, The Whole Woman. These are Meryl Streep’s best friends and she rushes down to the pier to conspicuously lark about with them to the bemusement of her Greek slaves. The impoverished masses are delighted by the alcohol-fueled hijinks of these women and soon they’re all singing that Abba-penned anthem of American imperialism, Money Money Money.

Elsewhere, Sophie is delighted with her haul of dads. It’s a whole Springsteen of middle-aged ennui (a “Springsteen” is the collective noun for bewildered dads). She decides to store them in a ruined attic (millennials, eh?), in order to hide them from her mother. And there is no doubt that this is where their corpses would have eventually been discovered by the authorities, were it not for Meryl, who senses their presence and breaks into a rendition of Mamma Mia for reasons that don’t entirely fit with the plot unless the film makers think that Sweden, Greece and Italy are all one country (a possibility).

Like a mad infant
Say what you like about Meryl Streep, but she throws herself into every part she plays. Here, dungareed like a mad infant, she leps about crooning enthusiastically while a literal Greek chorus encourage her. Her commitment is glorious.

Some say she went method for this role, spending a year as an Abba loon dominating a colony of natives on a Mediterranean island. Others say she believed the part to be a sequel to Sophie’s Choice. Others say Mamma Mia! was actually conceived as a hidden camera show and this is footage from her actual life. One way or another the woman is a goddamned star. “Ah,” I say aloud in the office. “This is delightfully batshit.”

(“What? The government corruption you’re investigating?” says my editor. I just nod sagely.)

Meryl’s giddy tomfoolery ends with her falling through a hole in the roof and landing at Skarsgard, Firth and Brosnan’s feet. Their faces all beam with delight (I mean, it’s Meryl!), except for Pierce, whose face says: “Oh God. Don’t make me sing.”

This makes Meryl sad and she runs from the room weeping, only for her terrifying chums Christine Baranski and Julie Walters to recall her pet name, “Chiquitita” (guess what happens here) and then recall her youthful years as a “dancing queen” (guess what happens here). Sadly, at no point does she fight in the Napoleonic Wars so there’s no real room for Waterloo (until the outro credits).

Meanwhile, over on a boat, Sophie is bonding with her three dads. Colin Firth strums a guitar and sings Our Last Summer and it’s pretty clear now that this is basically a big work night out at the karaoke that got out of hand and became a multi-million dollar film and I’m okay with that.

At this juncture, I should just name some songs that turn up and have you guess what happens: Super Trouper (a gunfight between Meryl and the Greek constabulary?) and Gimme! Gimme! Gimme! (A Man After Midnight) (Streep opens a male prostitution racket built on middle-aged dad-bods?).

At this point there are several “misunderstandings” that will eventually take a sentence each to resolve and, eventually, when we can take it no more, the music plays and Pierce Brosnan’s mouth opens. What emerges sounds like wind whistling through rusty pipes while some people bellow in an adjacent room.

“Jesus this is upsetting,” I say aloud.

(“What, the government corruption?” says my editor. I just nod.)

Luckily the song is SOS and ignoring what must be the cruel laughter of everyone on set, and heeding Brosnan’s plaintive cries, Streep joins in. She’s a fine woman Meryl Streep.

Things happen in quick succession. Sophie has a forgettable row with her forgettable beloved. Stellan Skarsgard shows us his bum (thank you, Stellan, I will treasure this memory). Christine Baranski finds a young man. Colin Firth finds a young man. Julie Walters, her lusts inflamed by Stellan Skarsgard’s wrinkled globes, hunts and captures him to the strains of Take a Chance on Me. Meryl tearfully sings The Winner Takes it All to Pierce Brosnan on a cliff edge, somehow predicting the tone of world politics 10 years later.

All in all, watching these charismatic just-about-tuneful older actors gamely throwing themselves at Abba songs without thought to personal injury is hugely entertaining and makes me wonder why anyone bothers making anything else.

The film concludes with everyone deciding that they like each other so much that they don’t want to find out who Sophie’s father is. “Kaching!” says Streep and files three claims for 20 years of child support.

Apparently nearly all of the main cast are returning. Clearly that post-credits scene in which the Greek islanders rise up and kill them all while singing a Motörhead song is non-canonical.

A Life On Our Planet: David Attenborough’s devastating but essential call to action
5