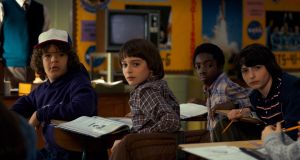 Stranger Things
Friday, Netflix
We have waited feverishly for a whole year, and now, at last, it’s time to go back into the upside-down for Stranger Things 2. And it’s about to get even stranger. It’s 1984, Ghostbusters is the big blockbuster, New Coke is the must-drink beverage, and for the town of Hawkins, Indiana, life is lurching back to normal after the horrific events of season one, with Mike, Dustin and Lucas trying to settle back into everyday life. Good luck with that. It’s not long before Will is having horrific visions, weird stuff starts happening, and a new creeping menace threatens to engulf the town.

Series one of Stranger Things was a stone-cold classic, a wonderful, thrilling homage to horror and sci-fi films of the 1980s, packed with smart pop-culture references and a superb cast, most of whom are back. Winona Ryder returns as Will’s mom Joyce, with David Harbour as police chief Jim Hopper and Charlie Heaton as Will’s big brother Jonathan. Can four kids in Ghostbusters costumes save Hawkins from this new horror? Don’t bother trying to contact me next Friday – I’ll be lost in the Upside-Down.

Marvel’s Inhumans
Wednesday, Sky One, 9pm
I’ve never been tempted to venture into the so-called Marvel universe, but for many telly fans, there’s no place else they’d rather be, so expect a decent turnout for Marvel’s Inhumans. Inhumans are different from mutants, now. They come from the dark side of the moon, are equipped with enough powers to destroy planets, and are too busy bickering with each other to bother with us puny humans.

But that all changes when a supernova-sized row breaks out between their leader Black Bolt and his brother Maximus, and the inhuman royal family end up stranded in Hawaii of all places, and have to enlist the help of humans to escape from their Hawaiian hellhole and back to their nice, barren home. Sheesh, these inhumans are crazy.

The Good Doctor
Friday, Sky Living, 9pm
Blame Atypical, but it seems TV shows are rushing to create central characters who are on the autism spectrum. The Good Doctor stars Freddie Highmore as Shaun Murphy, a brilliant young surgeon who also happens to have autism and savant syndrome. He can fix people, but he finds it hard to connect with them, and when he joins the surgical team at a busy city hospital, he has to prove to his new colleagues that his condition can be an asset and not a liability.

Bounty Hunters
Wednesday, Sky One, 10pm
British comedian Jack Whitehall teams up with veteran US actor Rosie Perez for a new comedy thriller series, Bounty Hunters. Whitehall plays bookish Barnaby Walker, who takes it on himself to save his family’s antique business after a mysterious accident puts his dad (Robert Lindsay) in hospital. But it looks like dad’s been doing some dodgy dealing, and Barnaby has to find a way to get back £50,000 owed to him. So he enlists the help of trigger-happy Brooklyn bounty hunter Nina Morales (as you do), and soon he finds himself deep in the doo-doo, and being targeted by police, terrorists and a Mexican drug cartel.

Man Down
Wednesday, Channel 4, 10pm
Greg Davies is back as idiot-manchild Dan in the fourth series of Man Down, and the pressure is on for Dan to grow up and start acting like an actual adult. The reason? He’s about to become a dad, and the last thing baby needs is a super-sized man-baby competing for everyone’s attention and throwing his toys out of the pram. So, will Dan man up and get some sense or will he become even more infantile? I couldn’t begin to guess.