FF councillor calls for a hard Border to ‘protect migration’ 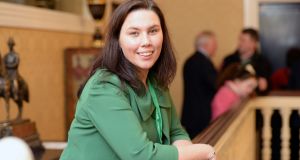 Fianna Fáil councillor Emma Coffey: her comments on Brexit differ to those of the Fianna Fáil leader Micheál Martin, who insists no border should be in place. Photograph: Eric Luke

Fianna Fáil councillor Emma Coffey has called for the imposition of a hard Border between Northern Ireland and the Republic to “protect the influx of migration”.

Ms Coffey said this was an “inevitable reality” that needed to be accepted by the Government and other political leaders.

The councillor described it as a “monstrous elephant in the room that nobody wants to talk about”.

Ms Coffey told The Irish Times: “I am calling for a hard Border to be implemented on the basis that we need certainty, we need to protect our local and national economy. We need to protect the influx of migration post-Brexit into Europe.

“I am not talking about EU or UK citizens, I am talking about the fact that there will be an extra burden on the only land border with EU and the UK. We need to be protected.”

Ms Coffey stressed her concern was the cost of such a development, something she believes should be acknowledged by the European Union and the United Kingdom.

The councillor’s comments on Brexit differ to those of the Fianna Fáil leader Micheál Martin, who insists no border should be in place.

Despite the Government’s insistence there will be no barrier between the North and the Republic, Ms Coffey stressed the language and the reports from the UK and EU indicate there will be.

She added: “We are facing a daily diet of falsehoods and spin. It is time for us to realise a hard Border is going to fall on us and we all have to suffer the consequences. We have to prepare for it, be ready for it and be practical about it.”

Earlier, Taoiseach Leo Varadkar claimed Fianna Fáil would seek to introduce a hard Border if it was in Government.

Mr Varadkar pointed to a motion passed at the party’s ardfheis earlier this month approving an M50-style border.

The Government would not accept such a policy, Mr Varadkar said, insisting its priority is to do everything to avoid introducing barriers to trade or to the movement of people.

The Taoiseach added: “I would be very concerned if [Fianna Fáil’s spokesman on Brexit] Stephen Donnelly was foreign minister and not Simon Coveney, that he would be over in London now discussing with Revenue and the British Government options for a border. That is not the right approach.”

The Government and Fianna Fáil have been trading criticism over Brexit policies in recent weeks.

Fianna Fáil’s spokesman on Brexit Stephen Donnelly has claimed the Taoiseach has sought to deliberately misrepresent his party’s position.

Mr Donnelly said Mr Varadkar is trying to score party political points on the back of the “enormous difficulties that are facing Northern Ireland as we prepare for Brexit”.