‘Gunpowder’: It’s got Kit Harington but no plot

TV review: The Guy Fawkes story is simplified and stretched. Sparks do not fly 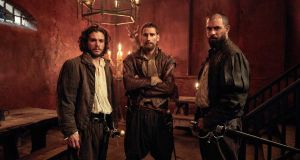 Anyone for torture? BBC’s Gunpowder

Even light reading into the background of one of the more famous, treasonous, and famously unsuccessful retaliations against Catholic suppression in England reveals a wealth of detail, character and – fittingly – plot. It’s a wonder that so little makes it into the first episode of Gunpowder (BBC One, Saturday, 9.10pm), a show with barrels of explosive material seemingly unable to find a fuse.

Elizabeth I is dead, and to judge from a pre-credits tracking shot towards the super-smug James I, the country is in unworthy hands.

Similarly, an early close-up of beatific Game of Thrones star Kit Harington, revealed in earnest prayer, tells you that Robert Catesby, leader of the plot, is the pensive good guy.

That is not quite the narrative of Guy Fawkes night, Britain’s annual feat of commemorative pyromania, in which an effigy of a treasonous Catholic wearing a jaunty pilgrim hat is ceremonially burned on a pyre to general merriment. Created by Harington, writer Ronan Bennett and Daniel West, and delivered just in time for the event, Gunpowder is a modest attempt at historical revisionism.

Directed by J Blakeson, the episode concentrates for long, unhurried stretches on the persecution of Catholics, less to ratchet up the tension than simply to fill time, before dwelling on especially graphic scenes of torture and execution. When the home of Catesby’s cousin, Lady Dorothy, is ransacked by rasping villain Sir William Wade, a concealed novice priest is eventually discovered, but England’s leading Jesuit, Father Henry Garnet (Peter Mullan), avoids capture. Lady Dorothy and the novice are later gruesomely executed: crushed to death, and hung, drawn and quartered, respectively. And so Catesby, given Harington’s practiced Jon Snow perma-mope, is radicalised. There will be “tumult”.

And Fawkes (Tom Cullen), finally revealed in an Assassin’s Creed cowl rather than a pointy little hat, is an absolute badass military man.

Blakeson features pleasing details in the shots: the lighting is always gorgeous, the costumes beautifully realised, and scholars of courtly hierarchy will be pleased to see the groom of the stool, one of the king’s intimates, pungently accounted for. But the story is oddly simplified and overstretched; for all the promise of the material, like the plot itself, sparks never fly.