TV review: Imagine Veep if the jokes were bunged in an airlock and blasted into the void 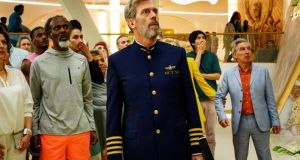 You wouldn’t guess it from the title but Avenue 5 is a workplace comedy set in outer space, starring Hugh Laurie and featuring an extended cameo by Hugh Laurie’s “American accent”. Yes the one from House that still give you shivers at night. Oh and it’s created, produced and written by Armando Iannucci, whose past triumphs include Veep and The Thick Of It .

Hang on a minute, though. Hasn’t Iannucci just released his big screen take on David Copperfield? What the Dickens is he doing simultaneously delivering a feel-good valentine to Victorian England and launching a prime time HBO chortle-fest (airing here on Sky One)?

That’s the question that occurs over and over through the first episode of Avenue 5. For a comedy set in space it doesn’t seem terribly interested in space – and pretty indifferent towards the comedy, too.

And it ends with Laurie, playing the captain of a luxury interstellar liner, ditching the wonky accent when he is unmasked, for reasons that have little to do with the plot, as a Brit passing as an American.

So it’s terrible. Imagine Veep if the jokes were bunged in an airlock and blasted into the void, leaving behind over-caffeinated actors mugging on autopilot. This is what you get here, with rocket-boosters attached.

The Avenue 5 is an interplanetary cruise ship that resembles the concourse of a suburban mall and is clearly crewed by incompetents. They are headed by Laurie’s Ryan Clark with Josh Gad as the vessel’s loathsome billionaire owner. Back on earth Nikki Amuka-Bird is wasted as the (equally idiotic) head of mission control. Everyone is inept, shifty and and crying out for a Malcolm Tucker to knock them into shape.

The passengers aren’t any more sympathetic. They include Thick of It regular Rebecca Front as an overbearing busy-body. She is justifiably outraged after a tragic event sends the ship off course and onto a trajectory that will delay its return to earth by 36 months. Yet she’s hard to take seriously, lumbered as she is with an American accent almost as distracting as Laurie’s.

Iannucci is one of our great satirists, and four seasons of The Thick of It, in particular, served as the perfect primer for the inter-cosmic omnishambles that was, is and will continue to be Brexit. But he and HBO have erred with Avenue 5, which fails, rather spectacularly, to get off the launch pad. Unless it improves and quickly it will be hard to see it as anything other than a jet-fuelled disaster for all involved.