Winter Love Island: Laura Whitmore is the hostess with the most… time off

The January show is a bore by the shore, a too-tanned horse being flogged to death 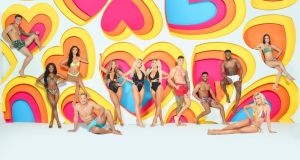 Love Island Winter 2020: the series has radiated all the red-hot intensity of a warm breeze wafting in from the sea Photograph: Joel Anderson/ITV/PA Wire

It has, on paper at least, been an action-packed opening week on Love Island Winter 2020. So why is the first January edition of the ITV2 snog soiree (aired on Virgin Media One in Ireland) turning out to be a gigantic bore by the shore?

As we count down to this weekend’s inaugural elimination episode, in which the contestant left without a partner is booted out of the Cape Town villa, with its oceanside views, the series has radiated all the red-hot intensity of a warm breeze wafting in from the sea.

The first talking point is of course the debut of Laura Whitmore as the show’s new presenter. (She replaces Caroline Flack, although for how long is unclear.) Obviously, “presenter” is pushing it, as the Irish former MTV host has hardly featured. She pops up on launch night, encouraging the 10 singletons to pair off and to briefly chat about romance.

She seems to be enjoying herself and makes for a sympathetic anchor. That’s in contrast to the heckling and rather annoying off-camera narration provided by Whitmore’s real-life partner, the comedian Iain Stirling. (Breaking news: single entendres are hil-ar-ious.) Yet her actual duties are minimal, and we’ve seen nothing of her since day one. She’s the hostess with the most… time off.

The second topic of discussion is the premature departure of the posh farmer Ollie Williams. The internet, fulfilling the purpose for which it was created, became agitated when images emerged of the heir to a Cornish estate posing with animals he had shot for sport.

But when he exits Love Island the stated reason is that he has just “remembered” he’s still in love with his ex-girlfriend. Nothing to do with the dead megafauna pictures ricocheting around Twitter and the inevitable social-media bushfire.

Whatever the rationale, he’s out. Tears are shed, manly man-hugs exchanged with the other islanders. And off he mooches, with a wobbly wheelie case and even wobblier lower lip.

Accompanied by sub-Mumford & Sons sad-bloke folk, the moment is portrayed as a calamity that will stay with us all for quite a while. But with Love Island ratings down by nearly a million, the true tragedy may be ITV’s insistence on bringing Love Island back for the second time in six months.

This tanned reality-TV horse has, it is beginning to look, been flogged to breaking point.