Patrick Stewart returns to Star Trek: ‘It’s inconceivable to me that I should retire’

Star Trek: Picard will be the actor’s first TV trip to that final frontier since 1994 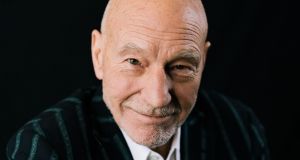 Star Trek: Picard – ‘I’m still Patrick inside this guy, and yes, there are noticeable differences from how I was 19 years ago.’ Photograph: Mark Sommerfeld/New York Times

We’ve just made ourselves comfortable in room 125 of the Corinthia Hotel, near Charing Cross Road in London, when an assistant pops her head in, winces, and apologises, because “we’re actually going to be moving you to another room”.

The eight or nine of us pick up our bits and decamp to another, almost identical suite, where we’ll be for the rest of the afternoon, hearing about Star Trek: Picard from its producers and cast, including its main star, Patrick Stewart.

After an 18-year hiatus, Stewart is returning as Admiral Jean-Luc Picard, who is now in his 90s, drawn out of retirement by news of a shadowy plot to subvert Starfleet. Abdandoning convalescence at his vineyard in La Barre – where he is attended by housekeeper/detective Laris, played by Orla Brady as a pleasingly Dublin-accented Romulan – he assembles a new crew to tackle a mounting galaxy-wide conspiracy, and restore to Starfleet values which may have gone amiss in the intervening years.

For his part Stewart, who will be 80 this year, has no intention of stepping back from the spotlight. “People have asked me about retirement,” he says when our group is safely ensconced in our permanent location, “and it’s inconceivable to me that I should retire. I became an actor because being on stage was the safest place for me to be. I had a rather perilous childhood in some respects and finding that safety on stage, where I didn’t have to be myself, I was being someone else in a different environment than the one I was used to, that’s something that has never left me.”

“My wife has even expressed concern about what would happen if I have to stop doing this job, because she’s anxious that I should turn into a monster.”

Many of the press here are clearly diehard fans, drawn from speciality and fan-adjacent publications, others don’t seem to know much about the topic beyond their deadline. I fall somewhere in the middle, an ardent admirer of Star Trek: The Next Generation from intermittent viewing in my college years, born a bit late to be swept up in its charms first time round. Everyone here, however, appreciates that the return of Sir Patrick Stewart’s Jean Luc Picard, is an event.

Picard, which comes to Amazon Prime on Friday, is Stewart’s first trip to that final frontier for television since 1994, and his first reprisal of the role in any form since 2002’s Star Trek: Nemesis, by which time he’d kindled an entirely new mega-fanbase as Professor Charles Xavier in the X-Men films. “It’s my feeling” he adds with a flourish of self-deprecation, “that you can’t have too many franchises.”

The Next Generation ran for seven years, spanning 178 episodes, followed by four subsequent feature films. In so doing, it created a cultural half-life which makes that span seem curiously short, and its quarter-century absence from television mind-boggling long. It’s odd to think that the show of the future – with its ever-present machine hum, and the personalised tablets which Apple designers have subsequently claimed were an early inspiration for the iPad – had ceased filming long before anyone in Ireland had ever sent a text message.

I ask the show’s creators if they worried that viewers might, in the ensuing quarter century, have moved on from the characters. “We had a principle,” says Michael Chabon, author of Pulitzer prize and Hugo Award winning novels like The Amazing Adventures of Kavalier & Klay, and The Yiddish Policeman’s Union, a devoted Trek fan, and one of the series’ executive producers. “We could anticipate a fan reaction to the return of these characters, but we could never rely on them saying: ‘oh my God!!!’. We could expect that, but not rely on it. Because that’s not enough, it has to be the story we’re telling.”

“We believed that our affection and yearning for his character was not exclusive to us,” adds fellow producer Akiva Goldsman. “Star Trek has a deep fanbase, but Next Generation has a deeper fanbase still.”

Goldsman attributes this to Picard’s gravitas, his surefooted sense of being the adult in the room. “There’s something unique about Patrick in that role that evoked our imagination then, a particular kind of leader the world needed.”

He adopts a rakish, piteous glance around the room before adding, “we sure need one like that now,” which draws laughter. “The combination of that with the cusp of the sunset of a life, it just seemed really compelling.”

The show’s cast, too, attribute this longevity to the ethos the show built, on a future world grounded in optimism and inquiry, rather than laser-guided thrills and death-defying stunts.

“The lasting thing about Star Trek is that it’s always been a show about people,” says Jonathan Del Arco, who returns as Hugh, a scientist assimilated into the Borg hive mind, “and how we can live up to our potential or refuse to do so. We’re definitely not living up to our potential now, in terms of compassion, intelligence, belief in science, those are things that are not happening right now. I feel like Star Trek says, I dunno, maybe some day we’ll get there.”

I ask if pitching a utopian show is a risk when the prevailing trend in sci-fi is for ever grislier and gritter dystopias.

Stewart himself says he harboured doubts about returning to old ground. “I found myself inclining to the seduction that was underway” he says. “I thought maybe it wasn’t something I should do, but when I heard the content of what they were hoping to make and the circumstances of it, I became more and more interested”.

“Patrick, and all the writers and actors that came before us, built up back story for us,” says Goldsman, “decades of memories that we could use to talk about the last stage of a life. You don’t get to do that often, much less with someone as remarkable with Patrick Stewart.”

And, in person, he is somewhat remarkable; quite starry, fairly silly, and proving winningly magnetic even to a room full of otherwise cynical journalists. When he joins us, his first utterance is to declare the hangover he’s nursing from the previous night’s premiere. He is, nevertheless, amiable and quick to offer a quote. “I would love to work with Tarantino,” he says immediately, on being asked about that director’s long-touted interest in making a Star Trek film. “I mean, absolutely. He’s a remarkable film maker.”

I have rather less luck with my own quote-mining, when I bring up the events of the third-season episode of The Next Generation called “The High Ground”, notorious among Irish Trek fans for the line in which Lt Commander Data reveals that Irish unification will, at least in Star Trek canon, be achieved in 2024. This one line was deemed so politically insensitive that the entire episode, first broadcast in 1990, was banned from airing in the UK until 2006. With four years to go to its presumptive date, I ask if he still thinks it could be on the cards.

“I have no recollection of that,” he says politely, rather dashing my hopes of securing a provocative headline scoop. “But then there’s little that I do recall. It’s true! People ask me about episodes by name and I don’t know what they’re talking about.”

He does, however, take the question as an opportunity to restate his outspoken views on Brexit, suggesting the Union’s Starfleet-esque mission for healing geo-political divisions as one of its key strengths.

“I often cite that I was a very passionate and active remainer, and I still am – but considering what happened in Europe where so many states have been able to overcome massive difficulties, such as the Good Friday agreement and so forth in Ireland, it all seems to be going in a rather negative direction now.”

“This has been too short,” he says, a few minutes later, as we bid farewell and the adult in the room is led slowly out of it. “When we do the next one, I’ll have to make these longer.” Such is the warmth and charisma with which he says it, more fool me, I believe him.