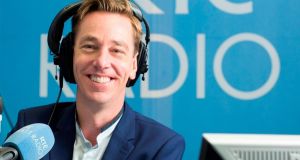 Ryan Tubridy got more political than he meant to last week. Photograph: RTÉ

With those words alone, Tubridy surely secures the loyalty of those listeners looking to avoid jostling politicians for an hour or so. As to what he’ll talk about instead, he sounds more unsure, however: “I’m not quite sure where to begin.”

True, Tubridy makes the latter statement about the newspaper stories in front of him, but it could equally apply to the items on last week’s programme (The Ryan Tubridy Show, RTÉ Radio 1, weekdays). Eschewing talk about politics is one thing, but finding decent material to replace it is something else, especially during the January lull: there are only so many guests you can harvest from RTÉ reality shows and dancing competitions.

Cue human interest stories. On Monday, Tubridy talks at length to Fiona, an Australian-Irish woman living in Vancouver, who recounts how she woke up hungover on Christmas morning, only to discover she was wearing a hospital wristband, with no memory of how it got there. It’s a cautionary tale about alcohol abuse, an all-too-regular subject on the radio.

With little else in the locker, Tubridy spins the item out longer than strictly necessary.

Tubridy’s interview with Dublin-born musician Úna Keane on Tuesday also starts out in low-key fashion. But the tone changes quickly, with the host noting that Keane’s story “takes a dark twist”. What follows is truly terrifying.

Keane recalls how, when working in Strasbourg 25 years ago, she was followed by a car while cycling home from her bar job late one night. A man brandishing a knife jumped from the car, forced her off her bike and raped her. “He just left me for dead,” she says.

Keane recounts her “heartbreaking” ordeal in stark terms, describing the emotional aftershocks in sparse but telling language. “It was so traumatic that I just buried it,” she says. Such was her shock that she told no one about it for seven years.

Throughout this, Tubridy is mindful of the optics of a male host pressing a woman for details on such a delicate subject. “When I ask you questions like this, it’s not in a judgmental or accusatory way,” he says, by way of reassuring both guest and audience. He attempts to balance curiosity with tact when Keane talks about the long-term effects of the attack, not least being uncomfortable with “intimacy”.

Keane’s experience is deeply distressing. It’s telling that her composure only breaks when talking about the birth of her daughter two years ago, which emphasises the emotional drain of remembering the attack. Her life since has had its ups and downs, including a stint living in a camper van. But her determination not to let the experience define her is a testament to her fortitude, as is the evocative music she makes. Meanwhile, by dealing with such topics as sexual violence, homelessness and personal identity, Tubridy ends up being more political than he intends.

Otherwise, the election campaign seeps into the unlikeliest of places, such as the normally reliable oasis of flippancy that is Dermot and Dave (Today FM, weekdays). Amidst customary items such as “Bad Joke Tuesday”, Dermot Whelan and Dave Moore decide to delve into current affairs, specifically the healthcare crisis. On a programme where a 10-minute celebrity chat counts as an in-depth item, they spend half an hour talking to Dr Maitiú Ó Tuathail of the National Association of General Practitioners about the intractable flaws in the State’s health system.

It’s an awkward encounter, though Terry Gilliam’s intelligence and black humour are evident

It’s an incongruous spectacle. The hosts’ interview technique mainly consists of repeatedly asking, in a variety of ways, why the health system is malfunctioning. “I still don’t understand,” an exasperated Whelan says at one stage. “We’re not a dumb race of people.” Ó Tuathail has some interesting insights and proposals, albeit filtered through a GP’s perspective, though one wonders how many listeners are paying attention. While Whelan and Moore are to be applauded for wanting to deal with serious issues, the whole interview is slightly absurd. The normally zany duo’s studied earnestness recalls the Simpsons episode featuring a vintage clip of Krusty the Clown somberly quizzing a union leader as to whether there’s a “labour crisis”. More than ever, it’s a time to stick to the jokes.

A morbidly comic air prevails when Seán Moncrieff (Newstalk, weekdays) speaks to film director Terry Gilliam about fellow Monty Python member Terry Jones, whose death had only been announced an hour before. Gilliam is naturally sad about Jones’s passing, noting that in recent years “dementia had taken its toll” on his old friend: “He wasn’t Terry any more.” When Moncrieff remarks that Jones wrote a book with the late academic Terry Dolan, a regular guest on the show, Gilliam gives a rueful chuckle: “All of us Terrys are going, I think our days are numbered.” Always look on the bright side of life, eh?

A slightly chastened-sounding Moncrieff moves the talk onto other topics, such as his guest’s new movie, but the mood doesn’t lighten greatly. A visionary if dogged film-maker, Gilliam has some typically offbeat observations – “the idea of being a realist is just horrible” – but sounds downcast, if blackly funny. He speaks of his disillusion at his adopted home of Britain in the Brexit era – “the joy is gone” – while dispelling his public image as a comic dreamer: “My wife knows what a miserable b*****d I am.” In truth he seems more sad and wounded than misanthropic, as one would expect following his old friend’s death. It’s an awkward encounter, though Gilliam’s intelligence and black humour are evident. Still, the election campaign doesn’t seem quite so grim after that.

Radio Moment of the Week: Meat the press with Healy-Rae

On The Last Word (Today FM, weekdays), Matt Cooper hosts a discussion on the urban-rural divide in Ireland. The consensus is that country areas are worse off than cities, with Kerry TD Michael Healy-Rae particularly forceful on this point. The Kerry Deputy says the Government is “anti-rural”, citing examples such as post office closures, the lack of broadband provision and, most damningly, Taoiseach Leo Varadkar’s dietary choices. “He said he was going to stop eating meat. What sort of an attack is that on rural Ireland?”

Cooper is astounded. “I don’t think eating meat is compulsory for anyone, Michael, it’s an individual choice.” But Healy-Rae sticks to his guns. Clearly, he has beef with Leo.