Picard isn’t perfect. But it’s keen on its mission and reverential towards Trek lore 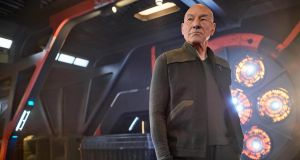 Star Trek: Picard: now that he’s beamed back to his glorious past, Patrick Stewart is clearly determined to do justice to the character

Star Trek: Picard (Thursday, Amazon Prime) is slower and more cautious than the old Trek, true. Yet there is so much here to make devotees rejoice. Stewart sinks his molars into the part of Picard, who is now 79 (like the actor) and living out his days in a vineyard in France.

It is an unhappy final frontier. Picard is haunted by the death of his synthetic pal Data in 2002’s Star Trek: Nemesis and disillusioned with Starfleet’s indifference to the death of millions of Romulans in the first Abrams Trek film.

As he potters around in a bitter-sweet fashion he is cared for by a Romulan named Laris. She is portrayed by Orla Brady with her Irish accent dialled all the way up. Later in the series she will become the first extraterrestrial in TV history to say “cheeky feckers”. Another protagonist mystifyingly boasts a Dublin twang. (He sounds jaunty, too: have the Dubs have now notched up 400 All Irelands in row?)

The production values  hark back to the early Next Generation, when Picard traversed the galaxy in a starship seemingly 75 per cent made of beige soft furnishings

Jean-Luc’s retirement is cut short by the arrival of a young woman whose ties to Picard’s traumatic backstory run deep. This brings Picard to Starfleet HQ in San Francisco and a run-in with a hit squad of assassins. A (frankly very hokey) phaserfight ensues, and Picard comes away convinced he needs to return to outer space and solve a rapidly expanding mystery.

Just how widely that mystery extends is confirmed in the final scene, set aboard a decommissioned cube belonging to the evil drone species the Borg. The game is so very much afoot.

Stewart had to be cajoled into returning to the part of Picard by the new series’ showrunner, Michael Chabon (yes, the Pulitzer-winning author). But now that he’s beamed back to his glorious past, Stewart is clearly determined to do justice to the character. As is Chabon, who displays an assured grasp of Trek tradition. Brent Spiner pops up in Picard’s dreams as Data in the opening episode. Later instalments will apparently see cameos from Jonathan Frakes as Commander Riker and Jeri Ryan as Seven of Nine.

Star Trek: Picard isn’t perfect. The production values in particular hark back to the early years of the Next Generation, when Jean-Luc traversed the galaxy in a starship seemingly 75 per cent made of beige soft furnishings. But it is enthusiastic about its mission and reverential towards Trek lore, and Stewart has never been better. With a little luck, Star Trek can reclaim its position as the pointy-eared space saga to rule them all.

Angela Lansbury: still a star at 90
7

Scary tales of New York: life in the Irish slums
9

The Overstory review: A ranter’s sermon
10