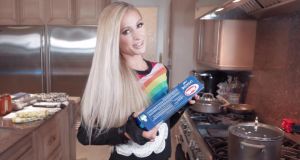 We haven’t heard enough from Paris Hilton lately. The good news is that she has gone slightly viral with her new cooking show, in which she teaches her followers how to cook lasagne in the style of a stinking-rich hotel heiress, DJ, socialite and reality-TV star. You’ll be glad to hear Cooking with Paris doesn’t involve anything as basic as making your own tomato sauce. It is a highly entertaining 16 minutes. Here are seven reasons why you need to watch it.

1 Fact: Paris Hilton is an amazing cook. She says so very early on in the YouTube video in which she makes her “infamous” lasagne while wearing “chef’s gloves”, which may look to you like fingerless golfing gloves. But that’s probably just because you are not an amazing cook.

2 Hilton makes the culinary impossible possible. You thought you couldn’t make lasagne while looking after a tiny dog called Diamond Baby and swishing your waist-length blond hair? You can and she does. In fairness to her, she issues a caveat about being careful with your hair so that it doesn’t catch fire, but apart from that it’s all good.

3 She showcases inventive ways with kitchen implements. At one point Hilton uses a potato masher to break up the minced beef, and this more than makes up for her failure to identify a spatula in another part of the video. “I don’t know what this is,” she says with admirable honesty, waving the spatula around. Then she calls spoons brutal. It’s mesmerising.

4 Hilton is not afraid to say it like it is in the kitchen. Lamenting the fact that her minions bought whole balls of mozzarella instead of the grated kind, she fishes out a grater from her equipment drawer. “Graters are annoying,” she says. Anyone who has ever grazed their knuckles while trying to grate that last bit of Parmesan cheese will heartily concur.

5 There is a really brilliant scene involving a container of table salt. She does something few people can achieve when she waves the salt around and most of it ends up on the stove top or the floor. Speaking of seasoning, she adds 11 twists of black pepper – she likes the number 11 – and seven of Himalayan pink salt. She doesn’t say why you need seven. Just go with it.

6 You will learn about unicorn mist. She doesn’t say, but it’s possible she harvested it from her unicorn ranch. It doesn’t really matter. The main thing is that Paris sprays it around the kitchen when she’s cooking, to mask any food smells, because the last thing you want when cooking lasagne is for the kitchen to smell like lasagne.

7 And, finally, if a recipe contains garlic and onions but you can’t be bothered to chop them, just do what Paris Hilton does, and leave them out completely. Amazing.