The Bystander review: The urge to conform, the need to take a stand 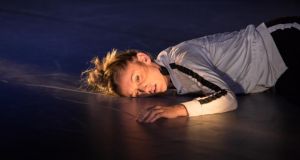 Axis, Ballymun
★ ★ ★ ★
In 1964 Kitty Genovese was stabbed and sexually assaulted outside her apartment block in Kew Gardens, New York. According to the New York Times, 38 neighbours saw her being attacked three times over 30 minutes, and eventually murdered, by Winston Moseley, but none came to her aid. The parable of indifference was summed up by a neighbour’s comment: “We didn’t want to get involved.” The incident, which quickly gained notoriety, became the first example of what psychologists dubbed the bystander effect.

Except much of that story isn’t true. Genovese was murdered, but there weren’t 38 witnesses. Few neighbours saw what happened, the police were in fact called, and Genovese died in the arms of a neighbour, Sophia Farrar. Forty years later the New York Times admitted its initial reporting was inaccurate, and so the parable of indifference became a parable of inaccuracy, oversimplification and rush to judgment.

Junk Ensemble’s The Bystander remains driven by anger at Genovese’s murder, but the dance language is nuanced and recognises the complexity of the bystander effect. In particular it goes beyond the value judgment of selfish apathy to more deep-rooted inhibition. Movement is deeply embedded, jittery twitches and guttural contractions that portray the conflict between conformity and individual responsibility. Societal conformity seems to wins out. The dancer Tilly Webber outlines how constant movement in the crowded London Underground is necessary: “If you stop you are not one of us.”

Genovese is recognised as a person rather than as a symbol (as Junk Ensemble did previously with Dolores Haze, from Nabokov’s Lolita). Stephanie Dufresne warmly recounts her sunny disposition and self-assurance through Farrar’s words. In contrast, text starkly outlines Moseley’s sociopathy – he just wanted to kill a woman – and entwines the murder committed by Meursault, the anti-hero from Camus’s The Stranger. In this context, quoting the novel’s closing lines suggests that an indifferent universe (“so brotherly” to Meursault’s own indifference) will always allow violence to thrive.

The dance shows that the bystander effect exists on a spectrum from local street attack to global social injustice. “What about the clothes we wear and the mobile phones we use?” asks the actor Steve Blount, in an age when “shares” and “likes” have replaced direct action. Appositely, Junk Ensemble’s trademark visual polish feels rawer, with darkly insistent performances from the cast, including the dancer Stephen Moynihan.