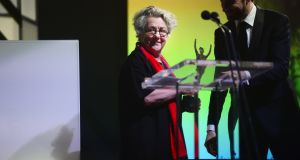 Garry Hynes, the Druid Theatre’s artistic director, says the theatre company had been forced to pull out due to the Galway 2020 project’s “loss of time, significant budget cuts and communication issues”. File photograph: Cyril Byrne

Druid’s artistic director Garry Hynes confirmed to The Irish Times that the award-winning theatre company had been forced to pull out due to the Galway 2020 project’s “loss of time, significant budget cuts and communication issues”.

“We have raised our concerns with the chair of Galway 2020 and are in ongoing discussions with them,” Ms Hynes said.

She was commenting on the eve of the Dublin Theatre Festival opening of the company’s DruidShakespeare: Richard III in the Abbey Theatre.

“Like other Galway producers, we want to make 2020 a success which builds upon the work of the Galway cultural community over the past decades,” she said.

Ms Hynes said Druid had not pulled out of Galway 2020 completely as it intends to work with it to fund an alternative project that has as yet to be identified. It is understood the company had put two years of work into the Middle Island project, but the budget offered no longer made it feasible.

The Druid Theatre decision is a significant setback to a project that is already mired in controversy since the loss of its creative director, Chris Baldwin, in late May. Its chief executive of just over a year, Hannah Kiely, stepped down last month.

The Galway 2020 board announced on Tuesday that Galway City Council director of services Patricia Philbin had been seconded to replace Ms Kiely – but there is still no creative lead, in spite of a commitment to appoint one by late July.

Druid’s joint production with Galway 2020 was to have been one of several flagship projects in the €46 million programme.

The Druid production, entitled Middle Island, was inspired by Colm Tóibín’s novella and play, Testament, relating the story of Mary’s life after the death of her son, Jesus.

The collaboration with Corsica and Theatre Cymru, Wales, was to have involved a journey by sea to the Aran island of Inis Meáin from Ros-a-Mhíl in south Connemara, with a cast of 10 professional actors led by Druid actress Marie Mullen and 20 people from the community.

Some 20 other artistic projects sharing similar worries to those of Druid are due to meet the chief executives of Galway city and county councils later this week.

The two local authorities are major funders of the European designation, with the Government giving the largest amount of the €46 million budget, at €15 million.

Already budget cuts to arts groups have been signalled and the group believes the project may only raise half of its target.

A source close to the group said it was “united in the aim of working constructively with the two stakeholders to achieve a profound shift away from the non-consultative approach that has brought us to this point”.

Galway 2020 did not respond to a request for comment on the Druid decision. Its chairwoman, Aideen McGinley, said it was delighted at Ms Philbin’s appointment.