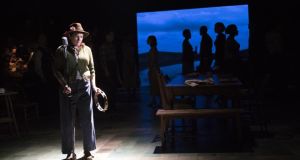 Brightness flickers fitfully in the bleak, beautiful landscape of Girl from the North Country, a rich and strange marriage of the talents of the Irish playwright Conor McPherson and the American songwriter Bob Dylan. The setting for this haunting musical melodrama of unmoored lives is, after all, a premature winter. In Minnesota. During the Great Depression.

So when something like joy or hope or love promises to light up the night in this ravishing production, which opened on Monday night at the Public Theater in New York, it doesn’t stand much chance against the prevailing darkness. This is a story of an age of privation and separation, in which homes are lost and families riven.

Yet when the people onstage sing, huddled together before old-time microphones as if they were campfires, they seem to conjure light and warmth out of the cold, cold night that surrounds them. These fleeting moments register with the glow of retinal afterimages, as if they were happening behind closed eyes.

If you’re a hard-core Bob Dylan fan, you’ve heard these songs before. But, for me, they’ve never sounded so heartbreakingly personal yet universal

As for the sweet, sorrowful voices, backed by fiddles and piano, they seem to come, beseechingly, from half-remembered family histories you might have been told by your grandparents. If you’re a hard-core Dylan fan, you’ve heard these songs before. But, for me at least, they’ve never sounded quite so heartbreakingly personal and universal at the same time.

As arranged and orchestrated by the British composer Simon Hale – in collaboration with McPherson, the show’s director as well as its writer – the songs exist in self-sufficient independence of their creator’s gravelly, much-imitated voice. You hear them ripening into new fullness. Those who scoffed when Dylan received the Nobel Prize in Literature in 2016 may find they have to think again.

Girl from the North Country debuted at London’s National Theatre in the summer of 2017, eight months after the prize had been announced. Five years earlier McPherson was approached by representatives of Dylan about using the songwriter’s catalogue as the basis for a musical.

It seemed like a bizarre conjunction, that of an Irish dramatist and an American balladeer. But in plays like Shining City and The Night Alive McPherson has shown a mystical appreciation of music as an expression of the numinous in life.

That respect for the ineffable has been translated into the most imaginative and inspired use to date of a popular composer’s songbook in this blighted era of the jukebox musical. In unfolding his portrait of the desperate tenants of a boardinghouse in Duluth, Minnesota (Dylan’s birthplace), in late 1934, McPherson never uses songs as a substitute for or extension of dialogue, à la Mamma Mia!

Only occasionally does a number – like the 1966 classic I Want You – seem to echo directly the thoughts of the characters singing it. Instead nearly every ensemble member becomes part of a choir, with soloists, that is as persuasive a latter-day equivalent of the Greek chorus as we’re ever likely to see.

What’s created, through songs written by Dylan over half a century, is a climate of feeling, as pervasive and evasive as fog. It’s an atmosphere of despair – with lyrics about lost chances, lost love and enduring loneliness – that finds grace in the communion of voices. coming together.

Certainly, the script is as forbiddingly fatalistic as that of a Greek tragedy. At its centre is Nick Laine (Stephen Bogardus), who rents out rooms in his ramshackle house in the hope of forestalling foreclosure. His family includes an alcoholic young son, Gene (Colton Ryan), who hopes to be a writer, and an adopted daughter, Marianne (Kimber Sprawl), who is pregnant, though how or by whom no one seems to know.

Nick’s wife, Elizabeth (Mare Winningham), is there and not there, suffering from a dementia that has turned her into a dependent, unruly child with a sailor’s mouth. So Nick seeks comfort in the arms of a boarder, Mrs Neilsen (Jeannette Bayardelle), who expects to come into some money.

Most everybody here has such expectations; nobody really believes in them. Images of lost and murdered children haunt the narrative, spectres of snuffed lives and broken hopes.

Also living on the premises are the Burkes – the blustery, big-talking father (Marc Kudisch) and the louche mother (Luba Mason) of Elias (Todd Almond), a grown man with a toddler’s mind. The newest arrivals are a self-described man of God, the Rev Marlowe (David Pittu), and an ex-convict and boxer, Joe Scott (Sydney James Harcourt).

The visitors include Mr Perry (Tom Nelis), a septuagenarian widower who is courting Marianne; Gene’s sometime girl, Kate Draper (Caitlin Houlahan); and the family physician, Dr Walker (Robert Joy). The doc is a cracker-barrel philosopher and occasional omniscient narrator in the folksy tradition of the Stage Manager of Thornton Wilder’s Our Town. He is also addicted to morphine.

These elements might have come from a build-your-own-vintage-American-social-realist drama assembly kit. I regard the 47-year-old McPherson as perhaps the finest English-language playwright of his generation. But last year, when I saw Girl from the North Country on its opening night in London, with a British ensemble straining for Americanness, the script often felt laboured and imitative.

With a uniformly excellent American cast that wears its roles like confining and prickly skins, and on a smaller stage, the play feels far more convincingly of a piece. The work of the same team of designers – Rae Smith (set and costumes), Mark Henderson (lighting) and Simon Baker (sound) – comes together here with the self-containment of a poem.

Within the production’s alternating visions of the claustrophobic boarding house and desolate roadscapes, the fraught denizens of Duluth seem perched precariously on the brink of infinity. There’s a mythic quality to the silhouetted figures who step from the shadows to sing and play instruments. (Lucy Hind’s movement direction is superb.)

And how they sing, every one of them. Moments I seem destined to recall forever include Winningham delivering Like a Rolling Stone as a curse and Forever Young as an elegy; Harcourt leading Hurricane like a rampant force of nature; and Mason (who doubles as a drummer) singing Is Your Love in Vain? with the wounded cynicism of a seen-it-all bar-room chanteuse.

Oh, and I haven’t mentioned how Sprawl turns Idiot Wind into a philosophic half-acceptance of romantic attraction. Or the miraculous moment when Almond’s stunted Elias croons Duquesne Whistle in the style of a big-band heart-throb.

The show’s most heartbreaking moments, though, are perhaps its happiest. I’m thinking in particular of the jubilant performance of You Ain’t Goin’ Nowhere that begins the second act.

It’s performed as a sort of hoedown celebration, with dancing that defines each participant as an idiosyncratic individual and as part of a synchronised whole. You may find yourself thinking that this is as close as mortals come to heaven on Earth. And for just a few, infinitely precious moments, a radiance eclipses the all-devouring night. – New York Times