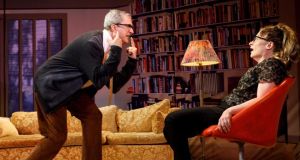 George and Martha, the rancorous protagonists of Edward Albee’s classic Who’s Afraid of Virginia Woolf?, have always been saturated in fiction. Their marriage is a lie, sustained by the lacerating invention of constant game play, in which truth is always negotiable: “Maybe, maybe not.” Kate Scelsa’s acerbic, postmodern riff on the play for Elevator Repair Service, a feminist clapback to Albee’s more self-serving conceits, takes another look at these fascinatingly ambiguous characters and claims to have their number.

What did Annie McNamara’s ravenous Martha tell a young couple about them, George asks in this show’s opening seconds. “That you’re totally gay and I’m a little gay,” goes her accelerated response, sending ripples through a contentedly flimsy two-dimensional backdrop. “You killed our son and your parents. You have a job because of my father and you hate it, and I’ve never had a job because of my father and I love it!”

Those jaded by Albee – and in the United States, where his play is a staple of lazy programming, there are many – may delight in seeing the subtext writ so large. Those hyperinformed by internet and intertext can spare a snarky chuckle when Gavin Price’s Nick, the one-time aspiring academic, briefs the party on the finer points of fan fiction, slash fiction (“Where you make everyone gay, even if they’re not”) and the gravid subgenre of “mpreg” (male pregnancy), in which both he and Scelsa are merrily dabbling. When Honey (April Matthis), an online-message-board habitue, is advised never to read the comments, though, you may wonder about the substance of a show that is itself nothing but commentary.

Much of that involves eye-rolling exasperation with male writers projecting their own neuroses on to women characters. Here Vin Knight’s hysterically squeamish George is a Tennessee Williams scholar who would rather be a drag-act southern belle, while Martha undermines every encounter with withering self-awareness. “What’s this now?” she asks Honey, briefly turning their attentions away from men. “Bechdel banter?”

John Collins’s previous visits to Dublin Theatre Festival have brought us the whirling enchantment of Gatz and the choreographed machismo of The Select (The Sun Also Rises). If the director pursues a trashier, splenetic, self-aware aesthetic here, reminiscent of René Pollesch’s, it may be because there is a tinge of nihilism in the project. “Fiction counts as aggression in my book,” announces a wearisomely woke graduate student (a “Mary Sue” proxy for the author), appearing in the form of a vampire at a hell mouth to feed off George’s flamboyant neuroses. That was certainly the case for Albee’s first couple, but at least their creations were bold and terrifying. Who’s afraid of this merry act of demolition?

Dear Life: Answering our questions about death without us having to ask them out loud
5

The highest-paid actors of 2019 revealed
6

How do I get my teenager off her phone and back reading?
7

Dylan Moran: ‘Smoking or breathing, one of them had to go’
Real news has value SUBSCRIBE