Eliza’s Adventures in the Uncanny Valley review: Can a riddle keep us interested?

Dublin Theatre Festival: The audience are stuck when a piece of theatre denies its characters humanity 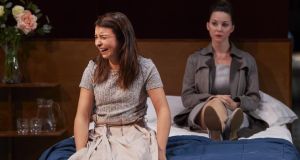 Eliza’s Adventures in the Uncanny Valley: Pan Pan explores the influence of artificial intelligence on our capacity to be human

ELIZA’S ADVENTURES IN THE UNCANNY VALLEY

Samuel Beckett Theatre, Trinity College Dublin
★ ★
Pan Pan Theatre’s latest theatrical experiment explores the influence of artificial intelligence on our capacity to be human. The laboratory in which it unfolds has the sterile domesticity of countless contemporary settings. Aedín Cosgrove’s design simultaneously offers us the blank slate of a therapy suite, the clinical vacuum of a modern hotel and the tidy uniformity of an Ikea-kitted home.

We are not quite sure about its inhabitants, either, who deliver layer upon layer of variously sourced quotations in a flat-vowelled drone, refusing eye contact in all but the most excitable of circumstances. Which of them are human, we are asked to consider. How much of them is human? Gavin Quinn and Eugene O’Brien, who “collaboratively generated” the performance text, are keeping it deliberately ambiguous.

In their exchanges, performed outwardly to the audience as if to a camera, Marvin (Andrew Bennett), Sophia (Amy Molloy) and Eric (Dylan Tighe) reveal the limitations of their machine-manipulated minds, as Mrs H (Jane McGrath), who is possibly the architect of this experimental endeavour, prompts them with exercises designed to challenge their potential behaviours.

Eliza (Genevieve Hulme-Beaman), with her wet eyes and worried frown, is, perhaps, different. Her failure to connect seems to be born from something more recognisable, but, then again, maybe she just hasn’t been part of the experiment for as long as the others have. Si Schroeder’s portentous sound design, which thickens as the performance proceeds towards its equivocal conclusion, certainly suggests this possibility.

But how is an audience supposed to react to a piece of theatre that denies its characters humanity? Empathy and recognition go out of the window, for a start, but is a riddle enough to keep us interested? It is really not until the final exchanges that anything about this uncanny exercise in AI’s threat to the human personality becomes clear, as Mrs H hits us with a punchline that would be funny were the previous 90 minutes a bit more so. If this is the future the characters are so concerned with, we should indeed be worried.

Armin Wegner, the German who stood up to genocide of both Armenians and Jews
10