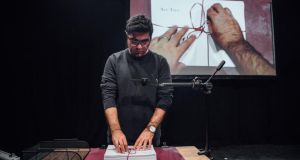 Project Arts Centre
★ ★ ★
A children’s story, a theatrical game and a language lesson: any review of the Iranian writer Nassim Soleimanpour’s autobiographical play must glide over much of the detail, as the essence of the performance lies in its elements of surprise. A different guest performer each night opens a box file to find the script within, then follows stage instructions projected on a screen. On opening night the actor, director and playwright Nyree Yergainharsian gamely performs the script, adding her own funny asides as she learns how to pronounce her first words of Farsi, in exchange for some Dublin swear words.

Soleimanpour has widely toured this play, which is directed by Omar Elerian, in a coproduction with the Bush Theatre in London. His previous work includes the award-winning White Rabbit, Red Rabbit, seen at Dublin Fringe Festival in 2012, at a time when Soleimanpour was barred from leaving Iran. While that work was more overtly concerned with censorship, here he is exploring our impulse to connect: through translation, through the proximity created by live performance, and remotely.

Initially offstage on camera, Soleimanpour joins the guest performer halfway through, playing himself, and gently guiding the proceedings as audience members volunteer to get involved. Live video links, photography and mobile phones are artfully pressed into service of a performance that has a surface simplicity but asks questions about the extent to which our capacity for empathy depends on access to this technology.

There’s no doubt that “the heart crumples” loses its poetry in English translation as “I miss you”, but some of the key words in his picture-book story of a small boy growing up in Shiraz are readily understood: mother and home. Seemingly universal, yet our relationship to those words will necessarily be complicated by our experiences of belonging and unbelonging. While “mother tongue” has a particular resonance in this playwright’s personal story of writing and exile, here the mother-son connection is made very literal. Veering towards the sentimental, and in the context of a performance that has taken place multiple times, it seems a little contrived.

As in his collection of unusual words from countries where he has performed this show, there is a sense of deflation that the word suggested by the Dublin audience, “discombobulated”, is already in his notebook. Perhaps that is his point, that even a repeat performance of spontaneous bonding is better than silence and isolation.