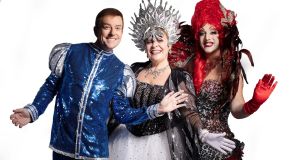 Alan Hughes as Sammy Sausages, Mary Byrne as Fairy Mary and Rob Murphy as Buffy in the Cheerios Panto Snow White and the Adventures of Sammy Sausages & Buffy

SNOW WHITE AND THE ADVENTURES OF SAMMY SAUSAGES & BUFFY

★★★★☆
Tivoli, Dublin
Much avant-garde theatre may aim to subvert the establishment, but when it comes to truly frightening the patriarchy, no show comes close to the Tivoli’s long-running (and Cheerios-sponsored) pantomime. “I can smell the fear among the dads,” cackles the panto’s irrepressible dame Buffy (Rob Murphy), scanning rows of nervous fathers for a suitable target after she first bursts onto the stage. Patriarchal uneasiness aside, however, Snow White is irresistible family entertainment, so gleefully naughty and exuberantly staged is Alan Hughes and Karl Broderick’s production, now in its final year at the venue.

As always in panto, subtlety is at a premium. The story of how Snow White (Keila-Ana Whelan) is threatened by the Evil Queen (Emily Carroll) and rescued by her Prince (Karl Bowe) serves as an excuse for rousing musical numbers and raucous comic performances. The real stars of the show are the gloriously lascivious Buffy and the more conventionally cheeky Sammy Sausages (Hughes), who helps keep things on an even keel for younger audience members. Both characters zing off each other with gags of such a saucy postcard stripe that even Sid James might blush.

Under the direction of Sean Gilligan, the pace rarely flags. Joe Duffy turns in a suitably mock-anguished appearance as the Magic Mirror, albeit in digital form, while Mary Byrne’s real purpose as Fairy Mary is to belt out big songs. A neat trick is used to bring the seven dwarves to life: amidst the Dublin slang of Broderick’s script, they are muppets in a more literal sense. Of particular note are the wonderfully energetic but beautifully controlled dancers, as choreographed by Paul Ryder, who also brings camp glamour to his role of Sparkle.

A show with so many disparate elements runs the risk of being too busy, but production and performances come together wonderfully, indeed hilariously. The musical finale’s segue between the themes from “the Benny Hill Show” and “Strictly Come Dancing” captures the atmosphere of popular light entertainment at its most infectious and appealing. By the end, even the most anxious dads - including this reviewer - have given in as they are rounded up on stage by Buffy. Resistance is futile.

TV guide: 23 of the best shows to watch this week
2

Suppose a Sentence: A timely reminder of the beauty and importance of words
7