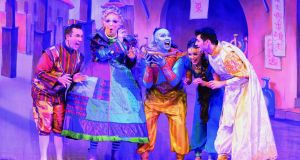 ★★★★★
Cork Opera House
The five-star choreography performed by a tinsel-encrusted and apparently tireless chorus line elevates this production from the merely seasonal to the any-time-of-the-year marvellous. Director Trevor Ryan can always be trusted to provide the pantomime clichés of broad double-meaning, bangs and booms and topical references, a compelling villain and an inept hero and the connectivity between stage and audience which guarantees empathy and shatters decibels. That trust is not disappointed, although it would assist some of the pivotal moments if a tiny pause for effect could be inserted occasionally in the repartee. Critical events like the exchange of the new lamps for old could be rescued by simple stage-craft. With such a minimal script as this pace is not always everything but here it is definitely something as Wishy-Washy and his brother Aladdin try respectively to imagine an escape from Nanny Nellie’s laundry business and wealth and marriage to the Princess Jasmine.

While the gilded sets reflect the geographically confused locations of the plot the only place that matters is the cave, with its Genie (a terrific Barry Keenan) and his flying carpet. Swooping and hovering above the stage this magic flooring quietens the auditorium to a hum of wonderment until hilarity is restored by the chase to rescue the lamp from the evil Abenazar (Michael Grennell in fine voice). The unabashed over-acting is justified by the response of at least five hundred children exercising their license to scream. It could be a case of all gong and no dinner, but the singing, the vigorous band under musical director Ronan Holohan, the raking immersive lighting by Drew McCarthy, the radiant colours of Joan Hickson’s glittering costuming, and the dance ensemble’s obvious delight in Ciaran Connolly’s choreography all combine in a presentation resplendent with the good cheer of technical and creative sophistication.