Panto review: Alice: The Musical at the Lyric Theatre, Belfast

A big, blousy performance that hints at Theresa in Brexitland 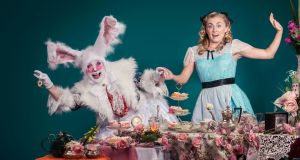 Alice: The Musical – a big, blousy performance that hints at Theresa in Brexitland

★★★★☆
Lyric Theatre, Belfast
Many a time and oft, the unravelling craziness of Brexit has been described as closely resembling Alice’s bewildering experiences at the bottom of a rabbit hole. Never could Lewis Carroll have imagined that, over 150 years later, his nutty, cartoony characters would have taken on new life in the real world.

In this fizzing 20th anniversary revival of Paul Boyd’s Alice: The Musical it is impossible to ignore sly references to everything being in a muddle, nobody having a plan, life never being the same again and the necessity to depose a headstrong female leader, in this case, the manic Queen of Hearts, imperiously played by Allison Harding.

It is difficult to register that a mere seven performers could carry this big, blousy musical with such confidence and aplomb. For some reason, Boyd directs them all to speak with English accents. Ruby Campbell’s sassy Alice is a dead ringer for Mary Poppins, Mark Dugdale’s magnificent Mad Hatter lisps and stutters like a precocious public schoolboy, while Adam Dougal’s sweet-faced March Hare could be straight out of Eastenders. Musically, however, there is not a false note between them, with Campbell and Charlotte McCurry’s slinky, smirking Cheshire Cat narrator sounding as polished as anything on a West End stage.

After a cracking first act, the pace of Act II dips significantly, signalled by much shuffling and fidgeting from small audience members. But a breathless, max volume finale sends everyone out into the winter chill floating on a really terrific night out.