The more implausible the better in this fresh, colourful and wildly funny pantomime 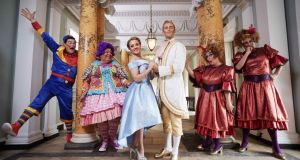 Cinderella: the more implausible the better in this fresh, colourful and wildly funny pantomime

★★★★☆
Everyman Theatre, Cork
Pantomime is a theatrical free-for-all in which production companies enjoy bending traditional material to their often incomprehensible will. The rule is exemplified by the Everyman Theatre’s riotous (and that’s just the audience) version of Cinderella which to avoid any accusations of misrepresentation should properly be called Cinderella and the Golden Egg, or Cinderella and the Goose or indeed any title which hints at this inexplicable confusion of fairy tales. All pantomimes however prefer exploitation to explanation and thus Director Catherine Mahon-Buckley allows the Everyman Cinderella to romp its merry way to goose-feather glory by sending its heroine off to the ball in a coach largely composed of geese.

The transformation of Cinderella from kitchen skivvy to glamour girl is one of the challenges of the story and this feathery unfolding of the carriage is greeted with awe and delight. The triumph of Olan Wrynn’s design is enhanced by the costumes of Jessica Healy-Rettig and by Anth Kaley’s band and there are enough senior infants in choreographers Robert Foley and Kelly-Ann Murphy’s dance troupe to wring every parental heart in the house. Not that they need much wringing: the show offers total engagement and the young audience is so joyously committed to events on stage – the more implausible the better – as to suggest not only that they know the script but that they might have written it, goose and all.

April Kelly-Hackett quacks her way through the madcap mayhem led by Jimmy Brockie as Buttons and breaking around Ciaran Bermingham’s Biddy Murphy. While the action from scullery to ballroom moves faster than might be usual there is no doubting the poise and popularity of Zoe Talbot as Cinderella and Ross MacLeod as the Prince, both handsome, tuneful and with that touch of personal chemistry which strengthens the core of this fresh, colourful and wildly funny pantomime.