Panto review: Jack and the Beanstalk 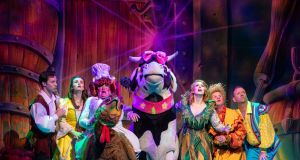 JACK AND THE BEANSTALK

★★★★☆
Grand Opera House, Belfast
Any attempt on a radical new version of the centuries-old tale of Jack the Giant-Killer is something akin to reinventing the wheel. In its latterday reincarnation as Jack and the Beanstalk, the unequal clash between an immense, insatiable cannibal and a gormless country boy has gone through many and varied stage presentations.

In recent years, for all their high octane glitz, glamour and celebrity names, the pantomimes at Belfast’s Grand Opera House have come to feel formulaic, with local regulars like May McFettridge and Paddy Jenkins appearing to be operating on automatic pilot.

This year, however, new director Andrew Wright has gone back to basics. As befits a Qdos show, production values are sky high but the humour and storytelling are gentler, the costumes dazzling with picture-book charm rather than gaudy sequins and the pop-up set changes framed in beautifully painted backdrops.

The interval is signalled by May taking off in a helicopter over the heads of the audience on a rescue mission to the top of the beanstalk. And to keep us on our toes, a pair of Italian roller-blading acrobats perform a death defying sequence, which adds little to the narrative but whose sheer daring takes the breath away.